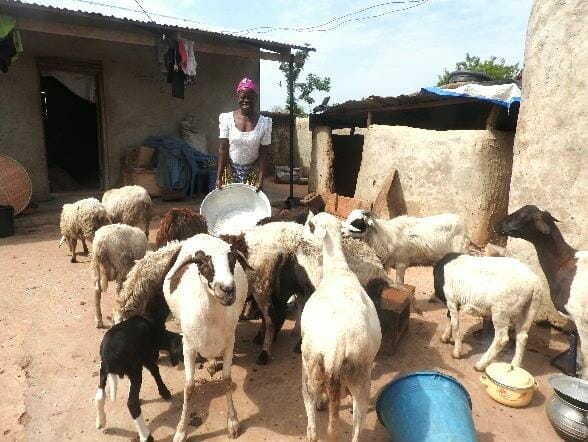 This is the second part of the four-parts series. Read the beginning here: https://is.gd/AORh4l

In many rural communities of Northern Ghana, farmers depend on a single rainy season for the family’s annual food and income. As an added security measure, men often rear small ruminants or poultry, to supplement their farming revenue. Strong management of small ruminants – sheep, in particular – requires several key items: shelter, timely medical care & vaccinations, and general knowledge of supplementary feeding needs. Availability of community-level support mechanisms, such as basic veterinary services, plays a pivotal role in the successful breeding of the animals. Because of the costs associated with purchasing the starter flock and supplying the needed care, in a rural community like Tampoaya in the Nanumba South District of the Northern Region, women and the most vulnerable households do not have the needed capital to invest in the lucrative livestock sector. Through the support of the USAID-funded Resiliency in Northern Ghana (RING) Project, the Nanumba South District Assembly (NSDA) is making a great effort to change that.

Mrs. Vida Ambiasem is a single mother of three from Tampoaya. Mrs. Vida also lives with a physical disability, which limits her movements, though she hasn’t allowed it to keep her down in life. Recognizing that livestock management has huge potential in the area, NSDA targeted Tampoaya for the small ruminant intervention funded through RING. As a result, in 2014, Mrs. Vida received training on animal husbandry, and the community selected two people who received intensive education and supplies to carry out basic medical care for the animals. Having been equipped with the requisite skills and support needed for the management of ruminants, Mrs. Vida received three sheep (ewes).

“As a single parent and physically challenged person, I saw the support from RING as a rare opportunity to build income security for myself and my children. So I make ample time to feed the animals and ensure timely vaccinations and medications.” Mrs. Vida Ambiasem Tampoaya Community, Nanumba South District

Mrs. Vida has since grown her starter flock to eighteen sheep, explaining that she had been able to succeed to this level by taking proper care of her sheep since day one. “As a single parent and physically challenged person, I saw the support from the RING as a rare opportunity to build income security for myself and my children. So I make ample time to feed the animals and ensure timely vaccinations and medications.” These sheep have been a buffer in times of shock, further motivating her to follow good animal husbandry practices. According to Mrs. Vida, in 2016, she became ill and had to sell two of the sheep for US$77; she used the money to buy medication and put the remainder toward clothing for her children. Realizing that ruminant sales could also be invested in other income-generating activities, in 2017, she sold one ram and used the money to cultivate two and a half acres of peanuts. She harvested nine bags and sold three of them for US$47. She then used that money to farm two acres of maize in 2018, expecting a larger return on investment as maize is both a major food and cash crop in Ghana. In June of this year, Mrs. Vida sold three of her sheep for a total of US$160 and combined that with the US$91 she took home from a recent community savings group funds share out to invest in a cow, an even larger financial asset.

Mrs. Vida informed officers during routine monitoring that some of her colleagues who also benefited from the RING small ruminant support lost several of their animals, resulting in the flock never reaching its full potential. They often wonder what she is doing differently to have such positive results. She explains that she always liaises with the District Veterinary Officer to vaccinate her animals regularly, and she takes deliberate care in their feeding and watering. That is her only secret. One emerging challenge has been theft prevention. Since 2014, five animals have been stolen – three from her pen and two while tied off and grazing near the house. To address the issue, Mrs. Vida said she was rallying the support of her community leaders and the Assemblyman to help her.

Aside from the management of the animals, Mrs. Vida also processes and sells gari and is engaged in petty trading of basic household items, like sugar and tea. Mrs. Vida said her plan is to sell half of her animals soon to enable her to purchase a permanent store front for her business. Mrs. Vida is also one of the many women who participate in the community Village Savings and Loans Association (VSLA). As a member, she has been supported with basic financial literacy training and, as anyone can see, this has paid off as Mrs. Vida has become a shrewd businesswoman with a diverse investment portfolio. Those investments have paid off for her family as well. In 2016, she used US$91 of the money she had saved to ensure her nephew had access to medical care after a snake bite. “My household and family will forever be grateful to USAID RING and the Assembly for all the support,” Mrs. Vida explained. And though RING was able to support her initially, Mrs. Vida has proven that, with a little guidance and opportunity, she has used the same drive that prevents her physical disability from holding her back to also build a resilient family.

This is the second part of the four-part series. Read how we help to build equity in traditional society – one family at a time, here: https://is.gd/iEstbp Visit our website in a few days to read the next installment – a story of women who learned the basics of financial literacy and managed to start their own enterprises.