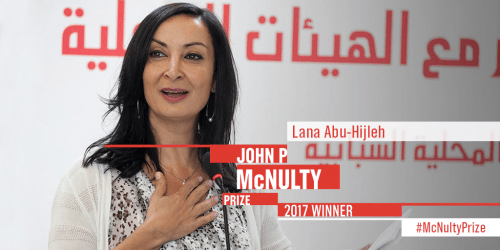 Global Communities Palestine Country Director Lana Abu-Hijleh has received the 10th Annual John P. McNulty Prize for her work creating and implementing local councils for youth which have been implemented in Palestine, Honduras, and are starting up in Ukraine. Abu-Hijleh was one of four finalists for the prize, which was announced today and will be awarded on November 8 at an event in New York City. The award provides the Youth Local Council initiative with $100,000 in support. This is Abu-Hijleh’s first time being honored as the winner of the McNulty Prize and second time as a finalist; she had previously been named a Laureate for her work with youth local councils in 2014.

Abu-Hijleh has created and expanded the Youth Local Council (YLC) concept. YLC’s, originally conceived as part of a USAID-funded local governance program in the West Bank, are democratically elected bodies of youth who voice the needs of their community and help bring about solutions to address them. In so doing, they help bridge the gap between local government and young Palestinians.

To date, the program includes more than 40 communities in Palestine involving more than 40,000 youth, and their success has helped foster democratic norms among the future leaders of their communities. Evidence of their effectiveness and sustainability is that these councils continue to operate even after the close of the program, with a further 20 YLCs establishing themselves completely independent of the original project. Today, some of the youth who were in YLCs are now deputy mayors and councilors in the West Bank, implementing what they learned through the initiative.

As the developer and champion of the YLC model, Abu-Hijleh entered and won a Global Communities-hosted competition for the most innovative, impactful idea, which expanded the initiative into Honduras. While this environment presented very different challenges than those in the West Bank, the lessons learned from the West Bank helped inform programming in Honduras and are now informing the start-up of YLCs in Ukraine, through Global Communities and USAID.

Lana Abu-Hijleh says the award belongs to the youth who have worked so hard for their communities and to those who will become involved in future efforts.  “My sincerest thanks to the McNulty Foundation for this prestigious honor, which is truly a testament to the drive and determination of the young people participating in these councils across the globe,” she says. “It is their endless dedication that makes all of this possible, and I hope that this recognition is just one step to expanding this program so that even more youth gain the skills they need to create peace in their communities.”

“As young people continue to make up an increased slice of the population worldwide, youth-focused programing will become even more important, and programs like the Youth Local Councils represent a proven model for building a more peaceful, prosperous world,” says David A. Weiss, President and CEO of Global Communities.  “We at Global Communities are incredibly proud of Lana and her team for all of their work, and we thank the McNulty Foundation for this tremendous honor.”

About Lana Abu-Hijleh: Lana Abu-Hijleh is a longtime expert in Palestinian development. She has been working for the past 28 years with international development and humanitarian agencies in Palestine and the region. Since 2003, Lana has been the Country Director of Global Communities (formerly CHF International) for Palestine. She recently led a team of 200 Palestinian and international professionals designing and implementing assistance programs focusing on economic revitalization, community and social infrastructure, democracy/governance, job creation, and food security in the West Bank and Gaza. Prior to her work with Global Communities, Lana served as the Deputy Resident Representative of the UNDP Program of Assistance to the Palestinian People for over 17 years.
About Global Communities: Global Communities is a global non-profit organization founded in 1952 that works closely with communities worldwide to bring about sustainable changes that improve the lives and livelihoods of the vulnerable. Global Communities believes that the people who understand their needs best are the people of the community itself. Global Communities has worked in the West Bank and Gaza since 1995. Learn more at www.globalcommunities.org and @G_Communities.

About The John P. McNulty Prize: Founded by Anne Welsh McNulty in honor of her late husband John, the McNulty Prize celebrates the boldness and impact of individuals who are using their exceptional leadership abilities, entrepreneurial spirit and private sector talents to address the world’s toughest challenges. Each year, the winner is selected by a jury that has previously included Mary Robinson, Bill Gates, Sr. and Sir Richard Branson. The winner receives $100,000 and each Laureate receives $25,000 to further his or her venture. The Prize is given in partnership with the Aspen Institute, and recognizes exceptional leadership ventures undertaken by Fellows of the Aspen Global Leadership Network.