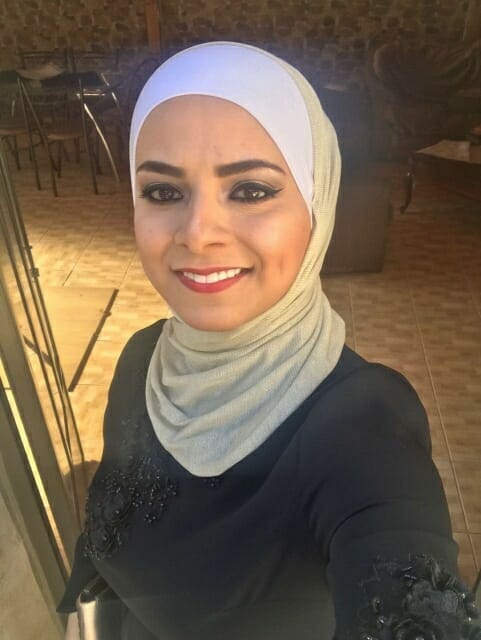 Unlike the West side of Amman the Capital, East Amman is characterized by compact buildings, narrow alleys, and humble neighborhoods in which children roam and play. This part of Amman is also known for its high levels of poverty and unemployment, which reached the rate of 24%, the with majority of which being women. Ruba Haddad is a 29-year-old young woman who lives in Bader, located in eastern Amman. Ruba created many friendships across Jordan, especially in western Amman, where poverty is not as prevalent. Many of her friends informed her that like many other families in western Amman, they have extra clothing, which they often throw away. “When I learned of this, I began to think of ways to use the unwanted clothing to benefit the residents of Bader.”

“I believe that young people, especially women, can change our lives for the better. We are the builders of the future. This is why we must empower young women everywhere to recognize the problems facing their communities and think of creative ways to solve them.”

After joining USAID YouthPower in 2019, Ruba began to put her idea of recycling clothing into action, she entitled her initiative “Your Old is My New.” Ruba and a team of volunteers began to communicate with agencies responsible for collecting second-hand clothing, recycling clothing, as well as local fashion designers in order to learn how to streamline the process of recycling clothing efficiently and effectively across Jordan. Ruba then designed a plan to share the knowledge aquired and encourage local women in Bader get involved. Ruba explains that this initiative helps decrease environmental pollution by recycling clothing. In addition to that, it will also reduce the unemployment rate among women by offering them skills necessary to recycle clothing on their own, and eventually resell their work. Ruba plans to distribute some of the recycled clothes to poor local families, thereby helpi alleviating the poverty faced by many in her community.

A major challenge Ruba recently faced was the curfew imposed by the government due to the COVID-19 outbreak, which put a minor halt in the implementation of the initiative. In response, Ruba quickly transitioned to work from home, she is still communicating with her team and potential partners to continue to look for new opportunities to further expand the initiative. Further, Ruba and her time are currently enrolled in a fashion design digital training offered by the program to build their skills in designing fashionable products. “On of the most important skills I gained from this experience is leadership skills.” Moving forward, Ruba wants to use these skills to continue empowering women in her community, whom will then contribute to the development of their own societies.

Ruba believes that when you empower one young woman, this is  exponentially spread within local communities and across countries as a whole, as women continue to pass on these skills to their families. With a focus on gender inclusion, USAID YouthPower continues to empower youth to act as engaged citizens and productive members of society to advocate for themselves and to shape services designed to better prepare them to enter higher education, vocational training and the workforce. In addition to Bader community. Since its start, USAID YouthPower activity supported more than 100 initiatives to date with a focus on female youth participation in 60 communities in Jordan.