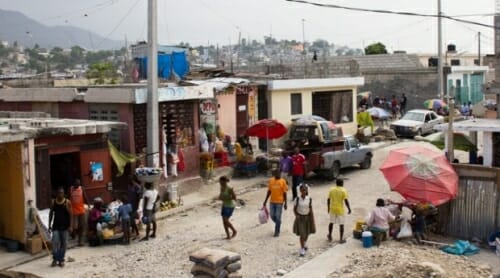 After a devastating earthquake, some innovative urban development work is going on in Port-au-Prince.
By Flavie Halais
This story originally appeared in Citiscope.

After a devastating earthquake in 2010, some innovative urban development work is going on in Port-au-Prince neighborhoods such as Delmas 32. (Flavie Halais)
In the five-and-a-half years since an earthquake killed more than 220,000 people here and displaced 1.5 million more, most of headlines from Haiti’s capital have been about dysfunctional projects, mismanagement, and the overall slow pace of reconstruction.
Yet some innovative urban development work is going on here, often under the radar. The government, in partnership with a number of non-governmental organizations, is leading a variety of rebuilding projects targeting Port-au-Prince’s most vulnerable neighborhoods. With a mix of reconstruction, infrastructure upgrades, and social programs, these projects are aimed at building safer and more resilient communities for the future.
I visited a number of these projects in May, with an eye on what was going right—and what lessons cities such as Kathmandu might learn from Haiti’s experience as they rebuild from a disaster or prepare for one. Here are six lessons urban practitioners in Port-au-Prince have learned.
Listen to residentsArchitects and engineers may have the technical expertise to lead reconstruction projects, but residents ultimately know what’s best for their neighborhoods. That’s a key takeaway from a pair of reconstruction projects run by the Pan American Development Foundation in a neighborhood called Delmas 32.
Early on, the foundation conducted focus groups to let residents express their visions for the neighborhood. “Community members helped us define priority projects,” explains Charles-Édouard Jean, technical director at PADF. “They said, ‘This is what we want. We want roads, we want this, and we want that.’ From these consultations, we designed a plan for the development of the area.”
Ongoing dialogue has the added benefit of building trust in communities that have long been neglected by public authorities and may be distrustful of urban projects. Part of the foundation’s role in Delmas 32 was to work with a group of homeowners to turn their plots into collective housing, thereby helping them move from shelters to apartment buildings. “When we showed them the project and what we were going to do, they didn’t believe it. They thought we’d end up kicking them out,” remembers Jean. “It took us time to convince them.”
Opening a local office near or on building sites has now become standard for organizations involved with construction projects in Port-au-Prince. That helps to establish an ongoing presence and to make sure residents know where to go to get their questions answered. NGOs are also using a lot of pilot projects to demonstrate results for residents quickly.
Small interventions go a long wayWhen so much housing is destroyed, the natural first focus is on rebuilding it. But what many organizations found in talking with residents was that other things such as accessibility within neighborhoods mattered just as much to them. In that regard, small and targeted interventions can have a tremendous impact on quality of life.
“Very often, a little wall or a ditch can separate two neighborhoods. By building a footbridge or breaking a wall, you can create communications,” says Karl-André Charles, technical director at Global Communities, an NGO working in several parts of Port-au-Prince. “A child saves 10 minutes on his way to school, a woman saves 15 minutes when going to the market. These gains are limited, and can seem ridiculous on the scale of 10 million people. But a little connection can change the daily life of 15,000 people.”
In Delmas 32, minor improvements, such as installing new solar street lights, have dramatically increased quality of life and safety. Children use the lights to study at night during power cuts—a frequent occurrence in Port-au-Prince—and market women can work late into the night without fear of assault. Renovated roads and pathways give a fresh look to this marginalized area. “The area is changing,” says Charles-Édouard Jean, “and people are now starting to feel a sense of pride and belonging.”
Build organically and holisticallyRebuilding is an incremental process that takes time. Many NGOs involved in reconstruction came to embrace this and shifted strategies after realizing that focusing on building new housing would be an endless money pit.

In the Delmas 32 neighborhood, minor improvements such as installing new solar street lights have dramatically increased quality of life and safety. (Dominic Chavez/World Bank)
Recognizing that most Haitians were already repairing their houses by themselves, the U.S. NGO Build Change came up with a homeowner-driven strategy for seismic retrofits. The method leaves residents in charge of building works, while providing them with financial and technical assistance. The hope is that as homeowners make improvements and additions to their homes gradually over time, they’ll have the know-how to build better. Homeowner-driven reconstruction has now been adopted as a best practice for urban development by the Haitian government, which also promotes training homeowners and construction workers in safe building techniques as a way to brace for future disasters. (See this Citiscope story for more on Build Change.)
Rebuilding for the long term requires a patient and holistic view that addresses the many causes of vulnerability. “You have to take into account everything the community needs in order to become resilient,” says Nadia Cherrouk, Haiti Country Director at PADF. “There are environmental problems, there are problems linked to natural disasters, there are social problems and there are infrastructure problems. So you need a multidisciplinary team that will assess every issue from all these different angles.”
Work with what is already thereIn Port-au-Prince, the most vulnerable areas have often been built informally—and sometimes illegally in places where residents don’t own the land. This can quickly turn into a headache for professionals who may not have been trained to work in informal contexts. Karl-André Charles of Global Communities says the question of intervening in these areas is almost a philosophical one. “Is it worth improving a place that wasn’t built well?” he asks.
Working in vulnerable communities involves a change of mindset that recognizes the right of informal communities to exist. “The fact is that informal settlements exist, and there are people living in this context. We can tell them that it’s not safe, but they will live in it anyway,” says Aline Séjourné, Haiti country director at Build Change. “Because we never know when the next earthquake or the next hurricane will hit, we want to make sure that they will be safe, and that on the short-term, retrofit is the most cost- and time-effective solution.”
Build government capacity through smart partnerships
When disaster strikes in developing countries, governments may not have the organizational capability to conduct rebuilding projects. That was the case in Haiti. Delegating projects to NGOs with niche expertise in terms of post-disaster reconstruction as well as development in disadvantaged areas has allowed the Haitian government to benefit from this expertise while staying in charge of the overall process.

Multi-family residences like the ones opened in April in the neighborhood of Morne Lazarre are relatively new to Haiti. (UCLBP)
Meanwhile, the NGOs implementing these projects have made sure to engage with a wide range of government actors such as municipalities, utility companies, and ministries, in order to help build the government’s ability to eventually take over. In some Port-au-Prince neighborhoods, a renovated road, new flight of stairs, or a connection to the water grid is the first tangible sign of a state presence in a very long time.
“Our mission is to work in the most vulnerable communities,” says Nadia Cherrouk. “We won’t be able to solve all problems, but what we can do is disseminate models, norms, and standards that will be passed on to the government and will be used on a larger scale.”
Experiment with new solutionsThe dire need for housing in Port-au-Prince has led to some creative experimentation with new models. For example, there wasn’t much multi-family housing in Port-au-Prince before the earthquake. But as the city grows denser, the government is using various pilot projects to try to introduce the concept.
“This is a model to which most of us aren’t used,” says Karl-André Charles of Global Communities, which has designed two different types of multi-family housing units. “People are used to having their backyard, their fence, their space, but we [all of Haiti] are now 10 million people living on 28,000 square kilometers and there isn’t enough space for everybody.” The first series of buildings was inaugurated by President Michel Martelly last April in a neighborhood called Morne Lazarre.
Not all of these experiments have proven successful. A new social housing project in the north of the metropolitan area called Village Lumane Casimir was supposed to house 3,000 families. But construction now appears to have stalled, leaving residents who have already moved in without access to basic services. Similar projects initiated under President Martelly or his predecessor, René Préval, are facing problems.
With tens of thousands still homeless from the quake, more experimentation will be needed. Key to the success of Port-au-Prince’s urban development will be the ability of the government to take over the work of partner NGOs and bring these projects to scale. This will not be possible without tackling the complex issue of land tenure and bringing the private sector into the game. But five years after the earthquake, the city can finally rely on a series of homegrown solutions and solid technical expertise to move forward.