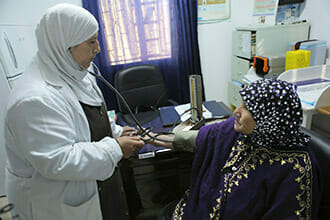 Al-Seeleh Healthcare Center: Enhancing Medical Services for Local Communities
The basic and medical services of Al Yarmouk Municipality in Irbid have deteriorated due to the demographic changes and continuous influx of refugees. Serving thousands of community members, the healthcare center in Al-Seelah neighborhood, already lacking basic needed services and equipment, have worsen due to the increasing number of occupants in that area.
After meeting with a number of residents, the center’s staff and the local health department in Al-Seeleh neighborhood who expressed the need to have a well-equipped center to better serve occupants, the USAID Community Engagement Project (USAID CEP) awarded a grant to Sama Al-Rousan Organization in July 2013 to rehabilitate Al Seeleh Healthcare Center and enhance the basic medical services and equipment. This was grant was part of USAID CEP’s Rapid Grants umbrella awarded to 29 NGOs in Tafileh, Irbid and Mafraq with a maximum ceiling of $10,000 per grant. The three-month-projects focused on addressing key community needs that would engage the largest number of community members as well as the local government.
USAID CEP is a three-year project funded by the United States Agency for International Development (USAID) and implemented by Global Communities (formerly CHF International). The project builds community cohesion and enhances the resilience of communities to more effectively address evolving challenges by engaging community members in a participatory manner to address community needs and stressors.
As part of the USAID CEP award, Sama Al-Rousan Organization has done general maintenance to Al-Seeleh Healthcare Center including painting, fixing the drainage and electrical wiring. In addition, basic and medical equipment, furniture and children’s toys were purchased to meet the needs of beneficiaries. “We receive around 30-40 daily patients, but we had only one old-system vaporizer and a blood pressure machine, which did not meet patients’ needs,” said Dr. Jamal Obeidat who works at the center. “The project helped us enhance the medical services to better serve Al-Seeleh community and has also improved the workplace environment for the center’s staff,” he added.
“We now have an ultrasound machine to serve women patients, particularly pregnant women who were forced to travel for long distances for their regular pregnancy checkups,” said Dr. Obeidat. “With the support of the project we also purchased two blood pressure machines, vaporizing machine, electric water heater, two air conditioners, two refrigerators and other medical devices in addition to furniture, which helped us provide good services for the area’s residents,” he added.
The center’s outdoor garden was also rehabilitated and a children’s play area was installed to provide comfort for kids who accompany their parents or visit the center for medical checkups. “The center’s services were remarkably improved and I think the children’s play area was a great idea!” said Um Aysar, a patient who visits the center regularly for medical checkup. “The play area helped children overcome the fear barrier when visiting the center,” said Dr. Obeidat.
According to the center’s staff, the beneficiaries witnessed a big difference in the center’s services and facilities and they’ve spread the word about those changes, which increased the number of beneficiaries to the center.