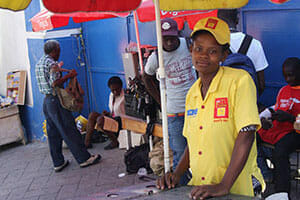 Café Ti Pilon: Supporting Young People from Low-income Families
By Jude Martinez Claircidor, Global Communities Haiti Communications Consultant
Remembering the Haiti EarthquakeFive years on since the devastating Haiti earthquake of January 12, 2010, Global Communities is telling the stories of some of our Haitian friends who are working hard to improve their lives and livelihoods in spite of the challenges that the earthquake created and the day-to-day difficulties they face in Haiti. We are focusing on the stories of those we worked with before the earthquake, who have shown the resilience and determination to make their livelihoods sustainable throughout the post-earthquake period. Together, we celebrate what they have achieved and continue to achieve as partners for good.

Lourdes Georges is now able to support herself with the money she earns working as a coffee vendor in the neighborhood of Pétion-Ville in Port-au-Prince.
Though the 2010 earthquake had a disastrous impact on the activities of many private companies in Haiti, the Café Ti Pilon project remained largely intact. At that time, Global Communities (formerly CHF International) partnered with Rebo SA to launch the project, which uses long-running Haitian customs to prepare and sell coffee using Haitian products according to hygienic and sanitary standards. The project is part of the USAID-funded Konbit Ak Tet Ansanm (KATA) program.
The project focuses on the private business sectors (micro, small and medium) to strengthen capacity, improve productivity and demonstrate their commitment to their community while creating new long-term jobs. It brings increased incomes to rural areas by re-evaluating commodities and assessing their importance compared to imported products.
Coffee production has declined considerably over the last 10 years in Haiti, but Ti Pilon helped develop the coffee industry in northern Haiti where the company REBO SA has established its offices to work with farmers. The partnership with Global Communities is a viable model for working with the private sector to create economic opportunities and sustainable development in Haiti.
Café Ti Pilon was launched with the establishment of a production center in Pétion-Ville with a staff of  three assigned to the production activities and operations and 15 micro entrepreneurs who soldcoffee with buttered bread to street carts. Currently the center has a staff of five, in addition to 35 micro-entrepreneurs.

The Ti Pilon production center in Pétion-Ville. The two Ti Pilon centers provide 75 jobs for micro-entrepreneurs and an additional 200 jobs for people working in the production chain.
Additionally, REBO SA has opened a new center on the road to the airport which includes three members appointed to the activities of production and 40 micro-entrepreneurs.
The centers represent a huge step forward since the project went from 15 to 75 micro- entrepreneurs who have benefited from direct employment says Bonnet Ben Junior, Assistant Operations of Ti Pilon, adding that 200 indirect jobs in the long term have been registered in the chain of the project including the production of bread, disposable cups, sugar plastic bags and packaging.
“The biggest impact of this project is that it directly affects unemployed and unskilled people living in volatile environments and who are in great need,” he says. ”We hire people who are in need but who also have the entrepreneurial spirit.”
Lourdes Georges, 32, a young mother living in a poor neighborhood of Port-au-Prince, is among the first employed as a mobile hot-coffee vendor on the streets of Pétion-Ville. She works six days a week selling coffee, milk and bread with mamba (peanut-butter). A cup of coffee and bread with mamba costs 54 cents. With the supplies in her cart provided to her by Ti Pilon, she can make up to $13 a day.
“This is a very positive experience. With this project, I earn money to support myself. The people of the community love the product, and now other people from other communities want Ti Pilon – that means the product is quality,” she says.
This innovative project was presented to the Economic Subsidy Contest organized in 2008 – and won, precisely because it strengthens the link between local producers and the private business sector.