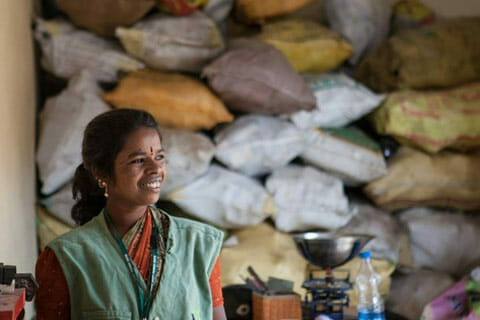 How Bangalore’s New Recycling Plan Helps Its Poorest Residents
By Sumit Chakraberty
This story originally appeared in The Atlantic Cities.

Annamma, 38, has picked recyclable garbage from dumps her whole life. Now, she manages a recycling center in Bangalore, India. Photo: Lakshmanan Selvaprakash
BANGALORE, India — As 38-year-old Annamma holds up her government-issued ID card, she can’t stop grinning. She has come a long way from her childhood on the streets: rootless, homeless, faceless. She grew up with four siblings and one name, common for children of illiterate parents here. The kids would rummage with their parents in garbage dumps for paper or plastic to sell to recyclers. They were a family of waste-pickers, driven by poverty from their native South Indian state of Andhra Pradesh to the booming IT hub of Bangalore in neighboring Karnataka.
Annamma remembers rainy nights spent under makeshift tents of sticks and plastic sheets, and scorching hot days spent in an endless search for scrap. She remembers being shunned by society, harassed by police, and viewed with suspicion wherever she went foraging. She never expected any better from life.
Now, her ID card gives her legitimacy and a defense against harassment by authorities. The card also entitles her to benefits like health care and a scholarship for her children. But that’s only the beginning of the transformation Annamma has experienced in the past year. Thanks to a 2012 trash crisis that had garbage piling up on the streets in Bangalore, Annamma now finds herself at the center of an ambitious experiment in reinventing how the city handles the 4,000 tons of waste it produces each day.
Annamma has become the manager of something called a dry waste collection center. Trash haulers bring dry waste, including paper, plastic and glass, to the ventilated concrete structure. (Wet waste such as food and organic matter goes to compost and biogas units.) At Annamma’s center, other waste-pickers sort through this trash and move what they can  up the chain to scrap dealers and other specialized recyclers. It’s essentially what they had been doing before, but in a healthier environment and without having to trudge around landfills where hazardous e-wastes and used sanitary napkins would be mixed in. The city plans to roll out these centers in all 196 of its wards.
What Annamma has been doing all her life has suddenly become a civic priority — formalized, dignified and systematized. It’s an outcome that the many millions of waste-pickers in the world’s developing cities could draw hope from. Annamma took charge of her waste center in January. “Living on the streets, my parents could only think of how to get the next meal,” she says. “I am better off now. I can give my three daughters an education.”

Identification cards given to Bangalore waste pickers offer legitimacy, as well as access to health care and scholarships. Photo: Lakshmanan Selvaprakash
Armies of Waste-PickersAnnamma’s elevation to a waste-center manager is the culmination of a dramatic 18 months in the life of a Bangalore waste-picker.
It began in the autumn of 2012, when Bangalore’s shiny image as an outsourcing destination got sullied, as mounds of garbage festered on street corners and dengue fever spread in the city. For some time, Bangalore had used a centralized trash system — contractors licensed by the municipality would transport the city’s waste to landfills on the outskirts. But villagers near those landfills revolted at having all the city’s trash dumped near their farms and homes. They began stopping trash trucks and attacking drivers.
The contractors stopped plying their garbage trucks. Waste disposal was suspended, and thousands of tons of muck simply piled up each day in the city. This went on for weeks. A city known as the “Garden City”  for its large parks got a new epithet: “Garbage City.”  The civic authorities went redder in the face each day as the high court issued one stern directive after another to clear up the mess.
To Annamma, a pile of garbage had always represented a means of livelihood, and not something from which to turn away in disgust. But even she could not have imagined how transformative these new putrefying piles of garbage would be for her.
From being a pariah on the fringes of society, she found herself thrust to the frontlines of a fight to contain a civic and health crisis in India’s software capital. NGOs persuaded armies of waste-pickers to come to the aid of the city in distress. They helped cart away whatever could be recycled, and burn the rest.
But a more fundamental change took place during the landfill impasse. This is when Bangalore’s officialdom started paying heed to what social workers had been crying hoarse over for years — that waste-pickers should be made a part of waste stream management to take advantage of India’s recycling culture.