Lessons from the Labyrinth: Regulating the Middle East Microfinance Marketplace 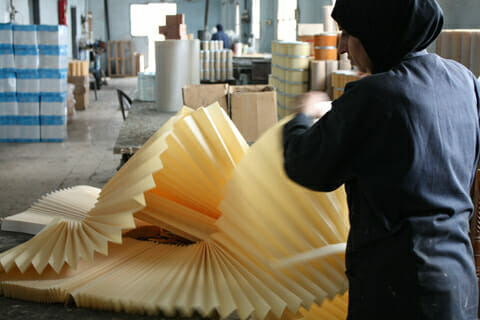 Lessons from the Labyrinth: Regulating the Middle East Microfinance Marketplace
By Elissa McCarter-LaBorde

A loan officer meeting with a client in Jordan.
It can be hard to keep pace with the rapid political changes occurring across the Middle East. But for those following microfinance regulatory reforms in the region, the pace of change is painstakingly slow. The Middle East remains the region with the lowest penetration rates of microfinance and SME lending in the world. It has the lowest proportion of foreign investment by impact investors, the lowest share of bank lending to SMEs, and no country in the region, aside from Yemen and Syria, allows microfinance institutions to offer savings products to the poor.
This is not to say there are no bright spots. After more than six years of negotiations, Global Communities recently received its license to operate in the West Bank as Vitas Palestine, one of the first for-profit non-bank financial institutions (NBFIs) to open its doors, after transformation from a program that has been in operation since 1994.
Vitas Group is the only commercial holding company in the Middle East open to private equity investors, with the mission to provide reliable financial services to underserved micro and small enterprises. It is the evolution of programs that were launched by Global Communities in the region starting in the 1990’s and, with a small amount of grant funds, grew through retained earnings over time to become the sustainable, profitable banking business that it is today. And because Vitas cannot get a bank license, it has to find creative ways through local partnerships with commercial banks, postal outlets, and insurance companies to offer more products to its customers than just debt.  Allowing for deposit mobilization, for example, is not an easy step for regulators to take, especially those Central Banks already reluctant to take on the burden of regulating a comparatively small microfinance sector that is not well understood.  Perhaps that, too, will come. For now, regulators across the region fall short of the modest steps where they should be today. However, by selecting pieces of regulation from various countries we can visualize a model environment for the Middle East as one might find in Uganda. Often cited as a good example, Uganda accords varying levels of microfinance organizations appropriate levels of regulatory oversight for their size and scope.
For example, in the West Bank, the Palestinian Monetary Authority (PMA) has taken huge strides to finally get the sector under one set of regulations. While many MFIs are still in transition and the outcome of actual PMA monitoring and oversight remains to be seen, it is a welcome shift in a place that until now has been defined by donor dependence and subsidized lending. The coordination among Ministries of Finance, Interior and the PMA was better than in other countries and the frequent engagement with microfinance managers and external stakeholders, though time consuming, paid off in that it established clearer dialogue and a better understanding by the regulators of the sector and its needs. The regulatory framework developed solved some of the critical questions that often worry regulators – such as how to treat donated equity and preserve the original social intent of those funds.
The Central Bank of Lebanon, also, is a highlight. The Banque du Liban (BDL) is one of the most progressive in the region. There are now three regulated finance companies in microfinance under the BDL, Vitas Lebanon having been the first. These companies are treated the same as banks. This creates heavy reporting requirements, but, nonetheless, we can say from experience that these requirements have forced a certain professionalization on those entities, from the number of staff management committees required, to the individual skills testing and vetting of senior management to comply with BDL regulations.  The BDL also offers an incentive for local commercial banks to lend to the sector.  Banks can use up to 5% of their reserves to lend to microfinance institutions at commercial rates that can be upwards of 8-9 percent.  This has freed up substantial domestic borrowing for MFIs.
These are two highlights in the regulatory framework in the Middle East that show positive directions for other countries to take. Overall, I am optimistic about investment prospects for the region, despite the current political and security dynamics, because at Vitas we have great confidence in our customer base, who will grow their livelihoods despite all odds, and because we have more than a decade-long track record to prove it. But prospects would improve significantly if regulators made the process less onerous for us – and for our hard-working customers.
Elissa McCarter-LaBorde is CEO of Vitas Group and Vice President for Development Finance at Global Communities.