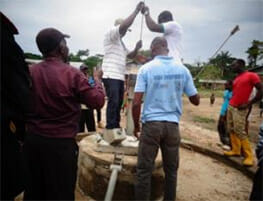 A cross-section of Kpoe Blima-Ta community showing uncontrolled domestic waste.
In the remote jungle of Bong County lies a tiny village called Kpoe Blima-Ta with a total population of 137 individuals. This community is situated in Zoe District, Bong County, Liberia. Prior to the implementation of the Partnerships Advancing Community-Based Services (PACS) project, this community had been suffering from a series of preventable diseases, such as cholera, malaria and typhoid. Almost everyone in this community practiced poor hygiene and sanitation behaviors, such as uncontrolled disposal of domestic waste, no hand washing after critical times, practicing Open Defecation and retrieving drinking water from a nearby, highly contaminated stream.
PACS, through Global Communities, started implementing the Community-Led Total Sanitation Plus (CLTS+) project here in early March 2015. During the initial meeting with Kpoe Blima-Ta stakeholders, leaders mentioned that this might be the turning point for their community and that they had been praying for such an opportunity for a long time. They also said that they were inspired by the fact that all ODF communities were safe from Ebola, and that they desired to attain and maintain ODF status as well. The stakeholders ended the meeting by signing a Letter of Interest solidifying the relationship between PACS and the community with clearly explained roles and responsibilities.

James Mulbah standing over his latrine pit during excavation.
Mr. James Mulbah is originally from this community and was proud to tell PACS team his story. He is the town chief of Kpoe Blima-Ta and has been a resident for over 56 years. He has two children, a son of 26 years and a daughter of 15 years, and is divorced from his wife. They are all living together in the same community. James did not go to school, but knows the tradition and culture of his village very well. In his interaction with the team, he mentioned that his community was not hit by Ebola, but that what they are currently suffering from is worse than Ebola. He further warned that, if they are not careful, the whole community will be heading for total disaster because of their poor hygiene practices.
“My family has been a victim of constant diarrhea, malaria and typhoid, amongst other diseases.” According to Mr. Mulbah, over 200 persons, including children between ages of 2 and 3 years old, fall sick on a monthly basis. Most of the sickness is a result of diarrheal diseases. He also explained that, since the initiation of the CLTS+ project in his village, there has already been rapid a reduction in sicknesses. The health improvements were due to massive cleaning campaigns that are now held on a weekly basis at the insistence of PACS staff. The community had also begun construction of household latrines, installation of hand washing facilities and practicing good hygiene behaviors.
Mr. Mulbah is very excited that his community is participating: “prioritizing CLTS is the path to a healthy life for any citizen in the world… If my village goes ODF through this process, I and my people will remain committed to cleaning our community, to drive away deadly sicknesses that are killing my people. I am currently constructing my household latrine and encouraging others to do the same so that we can meet our long awaiting dream.”