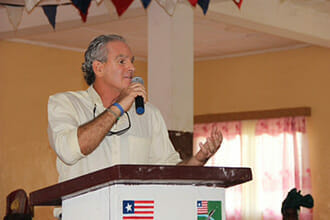 Global Communities Liberia Country Director Piet deVries, 57, has managed relief and development programs in eight countries. He has implemented health programming in Liberia since 2013.
Monrovia, Liberia – For Global Communities Liberia Country Director Piet deVries, two factors necessary for an effective Ebola response are a commitment to “solving the problem now” and an “an appreciation for all of the wisdom of the people around you.”
One year ago this month, Global Communities launched its response to the Ebola epidemic in Liberia. In that year, the team efficiently solved problems ranging from the development of an alternative to the country’s controversial Ebola victim cremation policy to effectively containing an Ebola outbreak among gang members in Montserrado County.
“In a response like this, you have to constantly reevaluate the program to make sure that it is addressing the need,” said deVries in a recent conversation at his office here. He has been Global Communities’ Liberia country director since 2013 and previously managed emergency responses and development programs in some eight countries including Kenya, Indonesia and Pakistan for multiple international organizations.
No stranger to addressing dire and basic human needs, deVries, 57, developed health and education services in Thailand, oversaw water, sanitation and hygiene provision in Pakistan and managed infrastructure development in Kosovo. But, he said, responding to Liberia’s Ebola epidemic has been his biggest professional challenge yet.
The Ebola response – which began with chlorine and hygiene material supply in Lofa County, where the virus first crossed the Liberian border from Guinea – has evolved from an offshoot of Global Communities’ Improved Water, Sanitation and Hygiene (IWASH) program into the Ebola-specific Assisting Liberians with Education to Reduce Transmission (ALERT) program, both funded by USAID.
Initially a modest $760,000 social mobilization program in three counties, ALERT expanded to a $20.8 million nationwide response as cases skyrocketed and Global Communities demonstrated capacity to take on more responsibility.
“When we got up to Lofa last March, the local health official told us to go to Foya – on the border – to see what they needed,” recalled deVries, who is originally from Aptos, California. “At that point, it was just scary. There were new cases, but we didn’t know how many or exactly where they were coming from. And we had never seen Ebola here before. It was a little spooky.”

61 burial and 51 disinfection teams active across the country.

More than 11,000 individuals participated in social mobilization and case investigation.
As of March 1, 2015

He explained that Global Communities continued to work with local IWASH contacts to conduct social mobilization and to train community health workers. “Cases dropped in May and June, and we shifted back to more general hygiene programming,” he said. “But in July, things really took off.” With cases increasing again, the Liberian Ministry of Health requested that Global Communities launch programming to combat Ebola denial and educate communities and local health workers on preventative measures.
“Our first trainings were to convince people that Ebola was real and not a plot of the government,” said deVries. “We worked closely with traditional leadership on how they could own the response.” He explained that Global Communities’ community meeting and dialogue session model encouraged communities to self-identify problems and solutions.
ALERT expanded again when cases were at their peak in August and September, and Global Communities added safe and dignified burial team management to its list of activities. By October, ALERT mobilized more than 50 safe burial teams across Liberia’s 15 counties.
“Unfortunately, there were a lot of dead bodies around that were being buried by families,” said deVries. “And we know that a major route of Ebola transmission takes place when people handle bodies.”
To ensure that trained burial teams were able to access remote communities, the ALERT team needed to adjust to difficult terrain. “We had teams walking overnight to reach communities at the peak of rainy season. We set up a canoe team to reach communities not accessible by land. We had to constantly adjust and adapt,” said deVries. But as cases were declining overall, their geographic spread increased.
“All along the way, we followed the disease where it spread,” said deVries. “We went into remote communities with our ambulance teams and got sick people out to treatment and identified and isolated their contacts.” The Global Communities response also included contact tracing – monitoring of those who came in contact with possible Ebola victims – and active case search to find unreported suspected cases.
Hunting down Ebola across the country for 12 months is exhausting. The ALERT team consistently works six to seven days a week and typically more than 10 hours a day. For deVries, essential ingredients to being able to keep pace is green tea and exercise. It’s not uncommon for him to catch an early-morning squash game at Monrovia’s squash club.
“So much of it is mental,” he said. “You’ve got to like what you do. And I like doing relief work. The immediate need of relief and meeting that need is incredibly gratifying…I love the camaraderie of people who are working on a cause they’re committed to.”
But, he noted, the hardest part of such work has been being separated from his two grown children and wife, Stefanie, who was evacuated from Liberia for several months when the epidemic was at its peak. “In a relief environment, all the people around you are work people,” he said. “You’re on 100 percent of the time.”
With a bachelor’s degree in economics from the University of California at San Diego, deVries began his career working in business in Silicon Valley. His private sector work brought him to Southeast Asia, and he became interested in international work.
“I really wanted to get into more international stuff, but I wanted to do it in a more altruistic way,” he said. He earned a master’s degree in international development technologies at Humboldt State University in Arcata, Calif., and in 1992 and started working in Thailand as an environmental engineer.
For the next 23 years, he lived in the United States and abroad working for both international nonprofits and private-sector companies. He joined Global Communities, then CHF International, in 2010 as a program manager in Pakistan and later became chief of party for a USAID-funded infrastructure program in Kosovo.
When asked what he thinks is ALERT’s biggest success, deVries paused. “Everyone would say safe burials. That’s what we’re known for,” he said. “For me, I think that our social mobilization strategy that targeted community leadership and empowered them to become advocates of Ebola response within their own community – to own the response at the community level – that was huge.”

DeVries discusses activities at Disco Hill with Liberia Ministry of Health representative Saah N’Tow.
He added that Disco Hill was another big success, referring to the safe burial site purchased by the Government of Liberia and developed and operated by Global Communities. Located about an hour outside of Monrovia, the opening of the site in late December offered a safe alternative to the government’s unpopular cremation mandate.
“It’s hard to grasp how much cremation undermined people’s willingness to go to Ebola Treatment Units and let their dead be released to burial teams,” deVries explained. These two things are essential to reduce Ebola transmission. People would be taken to the crematorium and their families would have no place to mourn them. With the Disco Hill site, families will be able to visit the graves of their loved ones.
DeVries believes that Global Communities was well poised to conduct an effective response because of the organization’s established trust and connections in the communities where it worked.
“We were technically in a good position, and our relationships with the county health teams, traditional leadership and the communities were very well-established through our IWASH program,” he said. “We also had very good relationships with the preventative arm of the Ministry of Health and had people on our team who knew how to work effectively with these actors to encourage behavior change, which is the essence of what was required for effective Ebola response.”
With the last known Ebola patient in Liberia released from treatment March 5, the team continues to push hard to ensure that the virus is eradicated from Liberia. “Now the countdown starts to see if we can go 42 days without a case,” said deVries.
In a new year of response, Global Communities will maintain current activities as needed and add focus to border surveillance and coordination to reduce the risk of cross-border re-infection from Sierra Leone and Guinea. The team will also promote community-based hygiene and sanitation improvements to help combat broader disease transmission.
For deVries personally, he will soon be based in the United States for the first time in nearly ten years. “The plan was always to come back to the United States when IWASH closed down in early 2015,” he said. With a daughter preparing to enter medical school and his son finishing university in Japan, he is excited to be able to spend time with his family more easily.
But, he will continue to support Global Communities’ water, sanitation and hygiene programming – including new sanitation-focused programming in Liberia – as the DC-area nonprofit’s senior WASH advisor.
“WASH access is a critical and immediate global problem,” he said. “So I look forward to continuing to tackling this issue in all the places where Global Communities is doing WASH work, and I’m excited to continue to engage with the Liberia team as they start a new chapter of Ebola response.”