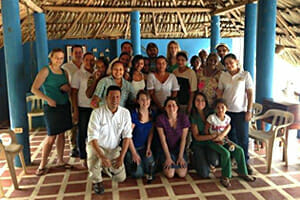 The evaluation team was comprised of AU Master’s Candidates Elisa Calle, Bernadette Cronley, Arica Maurer and Stephanie VanderMeer along with Global Communities staff from Colombia and headquarters.
Resilience is described as the capacity to respond, survive, and thrive in times of crisis. Partnering with American University (AU), Global Communities asked a team of graduate students to conduct an external review of two of its programs in Colombia. A newly launched program, ANDA and program that is about to conclude, Colombia Responde. Based on lessons learned and observations from interactions with stakeholders from both programs, the AU team was asked to compile a set of recommendations for ANDA. Working over the course of spring semester 2014 including one week in Colombia, the AU team designed a research method using a modified form of the ‘most significant change’ (MSC) technique conducting focus groups and key informant interviews in seven communities.
Several levels of community-level resilience programming were considered:

Agricultural and environmental programming, and

Emergency planning and preparedness.
Focus groups discussed interventions at each of these levels and recommended ways to strengthen the impact. The critical role of psychosocial interventions was quickly revealed and the immediate need for this type of intervention in the ANDA beneficiary communities was highlighted. It seemed clear that the building of trust between community members through psychosocial activities contributed directly to their willingness and capacity to organize. According to local participants, these types of interventions showed them how to forgive, move forward, and organize as a community. Equally critical is strengthening of youth involvement and buy-in to prevent youth from turning to illicit or dangerous activities. These young citizens show significant potential to grow and strengthen community development councils which often lack youth participants.