An Ebola Aid Worker Returns to D.C. – and 21 Days of Anxious Self-monitoring 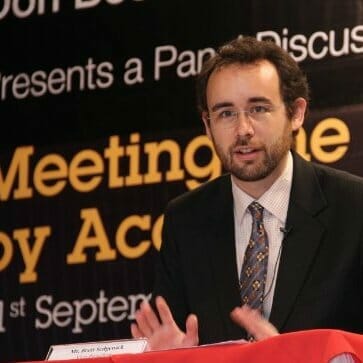 An Ebola Aid Worker Returns to D.C. – and 21 Days of Anxious Self-monitoring
By DeNeen L. Brown
This story originally appeared in the Washington Post.

Brett Sedgewick arrives at Washington Dulles International Airport after spending several weeks in Liberia managing burial teams on the front lines of the Ebola fight. (Photo: Michael S. Williamson/The Washington Post)
The morning after Brett Sedgewick returned from Liberia this month, he sat on the edge of his bed in his Northwest Washington home.
He’d just spent almost a month in Liberia overseeing the burial teams that collect the bodies of Ebola victims. Now, with some trepidation, Sedgewick took out the thermometer airport officials had given him as part of an “Ebola Care Kit,” along with a chart showing Ebola symptoms – fever, stomach pain, bleeding red eyes – and instructions on where to report for the next 21 days.
Careful monitoring would be crucial for Sedgewick, who works for Global Communities, an international nonprofit that has sent eight American staff members into Ebola hot zones.
In Monrovia, he managed teams that buried as many as 50 people a week, carefully placing Ebola victims into sealed bags and disinfecting everything around them. Sedgewick, 35, saw many bodies but did not handle them, always maintaining a three-foot distance and never shaking hands or touching others. He worked intense 12-hour days in the middle of the deadliest Ebola outbreak in history.
Now he was back home with his pregnant wife in their Petworth rowhouse, holding the thermometer he’d been given. It was not like the thermometer guns that were aimed at his head in Liberia that instantly displayed readings.

Brett Sedgewick records his temperature on a chart after returning home to Washington.
“The digital thermometer feels like it takes forever,” he said. The what-ifs raced through his mind during the 20 seconds the gauge was blank. What number would pop up?
“If it’s high,” Sedgewick said, “I would lock the door and call D.C. health officials and let them tell me what to do.”
The screen flashed: 97.5 F. “Okay,” Sedgewick said. “I can get going with my day.”
A Thanksgiving veto
In the months since Ebola began infecting and killing thousands of people in Liberia, Sierra Leone and Guinea, a small army of American doctors, diplomats, aid workers, medical researchers, military personnel and journalists have traveled to West Africa. Then they return home to 21 days fraught with uneasiness.
When Sedgewick left for Monrovia on Oct. 19, the United States was in a panic about Ebola. Thomas Eric Duncan, the Liberian man who traveled to Dallas where he was diagnosed with Ebola, had died. Duncan’s relatives had been quarantined. Two nurses who cared for Duncan were infected. Critics of President Obama demanded he close the borders. The World Health Organization had reported nearly 10,000 Ebola cases in West Africa, and the projected number was rising fast.
Sedgewick didn’t have to go to Liberia. He specializes in food security and economic development, not public health. But he’d spent two years in Liberia, knew the country well and told his bosses he wanted to help: “I said, ‘If you need me, just say the word.’ ”
Friends questioned his decision to go to Monrovia, with some joking that he should stay away from them for the 21-day virus incubation period after he got back. So before he returned, he issued a no grudges-held veto on seeing him to family and friends. If even one person was uncomfortable with him attending a family Thanksgiving dinner in New Jersey, he would stay away, he promised. He understood their fears.
Sedgewick landed at Washington Dulles International Airport at 3:17 p.m. on Nov. 8, on a United flight from Brussels. He was tired. At 6-foot-2, Sedgewick, whose dark brown hair is clipped short above his gold wire-rimmed glasses, is too tall to sleep on planes.
Immigration officials asked where he was coming from. When he told them Liberia, “They flagged me with a black X,” he said.
Sedgewick went to a room, where health workers in face shields, masks and gloves politely asked a series of questions: How long was he in Liberia? Did he handle blood samples? Spend time in Ebola treatment units? Spend time in houses with infected individuals? Touched any dead bodies?
“No,” he told them, “I’m not touching any dead bodies while I’m in Liberia.”
His answers put him in the “no known exposure category.” Officials handed him the Ebola Care Kit. He gathered his luggage and walked through a corridor of people waiting to greet travelers. A Washington Post photographer reached out to shake his hand. Sedgewick felt uneasy. The rules of Liberia were fresh in his mind.
“You are trained to stay three feet away from people,” Sedgewick explained. “You are constantly washing your hands with chlorine.” Each day, tags were stapled to his shirt with his temperature reading.
Sedgewick rode home in an Uber car. He gave his wife, Amy, who also works in global health but declined to be interviewed, a hug. It felt strange to be home after witnessing so much sickness and death in Liberia, he said.
“To have this experience and be in D.C.,” he said, “it’s hard to say, ‘I’m going to hang out at home and just watch TV.’ ”
‘Endless fear’
The country Sedgewick returned to was very different from the one he’d left. Much of the Ebola hysteria had died down.

Brett Sedgewick with David Humphries, Director of Communications for Global Communities (Photo: Michael S. Williamson/The Washington Post)
“Before he went away, there was wall-to-wall coverage,” said David Humphries, the director of communications for Global Communities. “There was endless fear.”
The anxiety seemed to dissipate after Kaci Hickox, a nurse who’d treated Ebola patients in Sierra Leone, publicly defied mandatory quarantine orders issued by New Jersey and Maine. A Maine judge sided with her, agreeing that she posed no threat to public health because she had no symptoms of the disease and that a quarantine violated her civil rights.
In contrast, Sedgewick got a call from a D.C. Department of Health official who asked for his temperature readings and repeated some of the same questions he’d been asked at the airport. The call lasted about 15 minutes.
After that, he stayed in touch by e-mail, dutifully recording his temperature every morning and evening and then sending the data to his contact at the health department. The e-mails are always brief: “11/10/14: 6 a.m.: 97.5; 9 p.m.: 96.5; 11/11/14: 7:30 a.m.: 97.9. 9:30 p.m.: 96.2. 11/12/14: 5:30 a.m.: 97.2.”
“Here is my latest reading,” Sedgewick wrote in one. “I have no symptoms so far. Do let me know if you need anything else. All the best, Brett.”
With each day that passed, he grew more confident that he did not have Ebola. He ran errands, cooked dinner for his wife, went to a friend’s birthday dinner and prepared testimony he would deliver before the House Foreign Affairs Committee.
On Nov. 17, Sedgewick returned to work at the Global Communities office in downtown Silver Spring. It was the same day a surgeon, who’d been flown to the United States in critical condition after treating Ebola patients in Sierra Leone, died at the University of Nebraska Medical Center. The death of Martin Salia, whose family lives in Maryland, was the second Ebola fatality in this country.
“It’s really sad,” Sedgewick said in his office. Salia had tested negative for Ebola in Sierra Leone – a reading that turned out to be false. False negatives worried Sedgewick in Liberia, where family members demanded loved ones who died be tested and, if free of Ebola, be given a traditional burial that involves kissing and washing the body.
“It was difficult to explain to people false negatives and the impact,” Sedgewick said. “It could be devastating.”
‘Did they hold you?’
Sedgewick woke at 7:30 a.m. the following morning and checked his temperature. Normal.
He dressed and hurried to Capitol Hill to testify before the House Foreign Affairs Committee. He sat between Darius Mans, president of Africare,a nonprofit international development organization based in Washington, and Rabih Torbay, of the International Medical Corps, which is headquartered in Los Angeles.
“I returned to the U.S. 10 days ago after spending three weeks in Liberia helping to lead our response on the ground,” Sedgewick told the committee. He described Global Communities partnership with USAID’s Office of Foreign Disaster Assistance.
One committee member wanted to know more details about his return: “Did they hold you in the airport? I’m glad they didn’t if they didn’t. But how did you sneak back in?”
The hearing room grew quiet.
“I was met at the airport,” he replied, explaining how Dulles officials flagged him. “They were really great, and they streamlined the process. My exposure was limited, and they took my temperature. Since then, I have been in daily contact with the D.C. Department of Health. I’m in contact with them every day. I self-monitor. I take my temperature twice a day and monitor any symptoms.”
He quickly added: “Of which I have none.”
On Wednesday morning, Sedgewick took his temperature. Normal. Then he and his wife headed to New Jersey, where they are celebrating Thanksgiving with his parents, four brothers and their families. No one vetoed him coming. In fact, he said, they are eager to see him.
One thing he’s thankful for: His 21-day self-monitoring period ends Saturday. “It will be nice,” he said. Finally, he will be able to put the Ebola kit thermometer away.