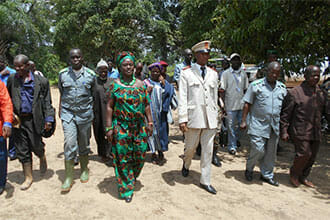 Bong County Superintendent Selena P Mappy and Yomou Prefecture Prefect Moustapha Forowe Conole enter the second cross-border meeting held between Bong and Yomou Counties to discuss Ebola surveillance.
Bheta, Yomou Prefecture, Guinea – Leaders from Liberia and Guinea met on Thursday to discuss Ebola surveillance across their shared border. Bong County Supervisor Selena P Mappy and Yomou Prefecture Prefect Moustapha Forowe Conole presided over the meeting, which included Paramount Chiefs, County Health Officers and Team Members, Joint Security representatives, community leaders and NGO representatives.
This was the second of many monthly meetings, coordinated by Global Communities, to be held between the two counties to discuss Ebola surveillance at border crossings. Such dedicated collaboration demonstrates the high priority with which the issue is treated in both counties and the need for wide participation from stakeholders to implement a solution.
Since being declared Ebola-free on May 9th, 2015, and since the last EVD case in Bong County was recorded on December 21, 2014, Liberia has turned its focus to ensuring that the outbreak does not return. As Guinea still has active cases, this effort includes helping its neighbors also become free of the virus. The President of the Bong Technical College noted that “Freedom of Guinea is critical for freedom of Liberia, since we live together as a family.”

Political, tribal and community leaders from Bong County and Yomou Prefecture preside over an Ebola surveillance meeting held in Bheta, Guinea.
The Bong County Health Officer shared his county’s strategy for becoming Ebola free: building and referring patients to the Ebola Treatment Unit (ETU); providing a place for suspected persons to stay while being tested for Ebola; and contact tracing. Currently, the Bong Community Health Team will stay vigilant in its surveillance by using “active case finding,” or seeking out individuals who may have Ebola and are crossing the border.
The Yomou Prefecture Health Officer demonstrated the strides that Guinea has already taken: many locations were not previously implementing a strategy in the fight against Ebola. Now, health representatives are engaging as many partners as possible in order to establish and maintain the systems that aided in Liberia’s – and Bong’s – success.
For both Bong and Yomou, registration of all travelers is critical, as it will aid in contact tracing should there be more active cases of Ebola in either country. The delegations emphasized that border communities play a significant role in this surveillance. People often cross the country borders without using formal checkpoints, and so an outbreak would be more difficult to isolate should there become one in these areas. However, border communities are often tightknit and travelers are easily identified, which underscores the need for continued awareness on EVD detection and prevention in communities, in addition to the need to strengthen formal health structures.
As Ebola becomes less visible, health workers are worried that complacency is becoming an issue in maintaining Liberia’s Ebola-free status. One participant made a point of asking to see photos of EVD patients as proof that it still exists; multiple leaders responded that both sides of the border must keep vigilant. County Health Teams and border community members will continue to work together across the county lines in order to maintain awareness and report ill travelers. As Superintendent Selena P Mappy noted, “If our neighbor’s house is on fire, our house is on fire as well.”

The checkpoint to enter Liberia. All persons who enter are required to wash their hands and have their temperature taken. If travelers have a high temperature, they are asked to step into a separate room to be better examined.

The meeting attendees also discussed the challenges and potential solutions to maintaining vigilance in the fight against Ebola. Notable among these was the language barrier: English, French and local languages are widely spoken throughout the region, and communications from Liberia are mainly in English. A suggested solution to this issue was identifying language representatives in border communities who can play a role in translating, which is especially important for illiterate populations and unwritten languages. Procedures are also currently being translated into French so that they can be more widely understood.
Another concern raised was the procedure to follow after a suspected case is identified. Health and NGO workers emphasized that someone with EVD symptoms should not be sent back to their country, which is often the first reaction in any cross-border issue. Instead, any persons with symptoms should be referred to nearby health centers or triages. As a result, communities must be aware of where to report such cases so that information can be gathered and distributed as quickly as possible.
Leaders remain hopeful because, despite the significant challenges faced in cross-border coordination – different languages, health systems and government structures – all sides are committed to working together for the common goal. All many remaining issues will require continued commitment from those on both sides of the border and to be discussed in future meetings.