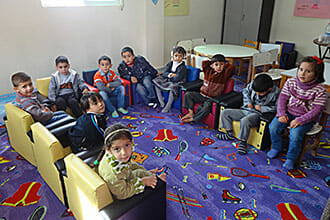 Bseira Nursery: Providing a Safe Environment for Children and Job Opportunities for Local Women
Working mothers in Bseira, a municipality located in Tafileh Governorate, face different challenges when searching for nurseries with reasonable fees, safe heating methods and qualified teachers and babysitters for their children. Many mothers leave their children in unlicensed home nurseries during working hours like neighbors or family members who need financial support. Some others leave their children in school nurseries with a large number of kids leaving them with lack of proper attention.
On the other hand, there is a high unemployment rate among women in Bseira despite the high education level among community members. Responding to this pressing need, the USAID Community Engagement Project (USAID CEP) awarded a grant to the Bseira Charitable Association to establish a licensed child care and early childhood development center for children to enable mothers to join the workforce and create job opportunities for qualified teachers and babysitters. This was grant was part of USAID CEP’s Rapid Grants umbrella awarded to 29 NGOs in Tafileh, Irbid and Mafraq with a maximum ceiling of  $10,000 per grant. The three-month-projects focused on addressing key community needs that would engage the largest number of community members as well as the local government.
USAID CEP is a three-year project funded by the United States Agency for International Development (USAID) and implemented by Global Communities (formerly CHF International). The project builds community cohesion and enhances the resilience of communities to more effectively address evolving challenges by engaging community members in a participatory manner to address community needs and stressors.
“Two of the top priorities identified at USAID CEP’s Community Wide Meeting held in Bseira last summer are creating job opportunities and for local communities and establishing licensed child care centers. As part of USAID CEP’s Rapid Grants Program, the Bseira Nursery opened its doors in November 2013, selecting a location that is surrounded by a high percentage of working women. The Bseira Charitable Association furnished the nursery, repaired it and hired a total of eight local women to work as teachers, babysitters, a nurse and a cleaner at the nursery,” said Dr. Jihad Al-Rfou’, Bseira Charitable Association Director. “The Bseira Association is allocating a monthly budget for paying the teachers’ salaries as a contribution to the community of Bseira,” he added.
Opening from 7 am – 4:30 pm, the nursery’s working hours are longer than other nurseries in the area, giving more time for working mothers. “We offer a competitive monthly fee of Jordanian dinars per child, whereas other nurseries usually charge 30. Additionally, the nursery supports selected poor families by accepting their children at no charge,” said Dr. Al-Rfou’.
“We received a total of 26 children this semester due to the exceptional services offered by the nursery; air heating units (instead of gas or kerosene), specialized teachers and babysitters, competitive fees, long working hours and close location,” said Hanan Mseideen the nursery’s Project Manager.
Announcements through the Bseira Education Directorate as well as flyers and ads displayed at mosques and schools in the area helped the Bseira nursery spread the word about its commencement and services. “I am a working mother of two boys Yazeed, four years and Yazan, eight months. I used to leave my children until 4 pm with my in-laws, but they are old and could not take care of the boys for long hours. I was searching for a nursery to enroll my children, when I heard about Bseira Nursery through a friend. I went to see the nursery and was impressed with the great services they offer; a cot for each baby, air heating units and specialized teachers and babysitters. I immediately decided to enroll my children,” said Khadeeja, a working mother of two.
Home nurseries is considered an alternative for licensed nurseries in Bseira, yet mothers face different challenges when choosing this option. Um Habib, a mother of two boys, was not satisfied to leave her four-year-old in a home nursery, “I used to leave him at a home nursery, yet it was not a healthy environment when family members get sick or smoke around kids. I used to pay 15 Jordanian dinars per month plus extra fees to provide house heating. I am very pleased with the Bseira Nursery; my sons is finally surrounded by kids and qualified teachers in such a healthy atmosphere,” said Um Habib.
On the other hand, this project created job opportunities for eight local women from Bseira who were selected according to certain criteria like qualifications, financial situation and experience. “I’m a mother of a four-year-old boy and haven’t had a job for four years. I am very happy with my new job at the nursery as a babysitter; it has really improved my economic conditions and allowed me to become independent, thank God,” said Aisha, a babysitter. “I love my job and I treat the babies and children who stay at the nursery as if they were my own children,” she added.
“When I obtained my Tawjihi degree, my family’s financial situation did not allow me to pursue with my education. I got married and worked as a babysitter for three years, but we had a lot of financial commitments that we needed to fulfill. I heard of the job vacancies at the Bseira Nursery, so I applied and got the job,” said Sajida, a babysitter. “My financial situation has improved and I now dream of pursuing my education and building our own house,” she added, full of hope.