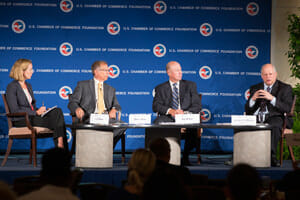 Community-Based Partnerships Achieve Big Results for Business
By Amy Levey, Senior Communications Officer
This story originally appeared on U.S. Chamber of Commerce Foundation.
The organization I work for, Global Communities, is an NGO which focuses on the community-based approach as a proven way to achieve sustainability in improving the lives and livelihoods of the vulnerable worldwide. We have partnered with many corporations in our community-based work, so I am particularly keen to see how the private sector and foundations are working at the community level to achieve impact. Evidence of what can be achieved with this approach was clear at a recent discussion Cultivating Local Impact at the Impact Equation Conference at the U.S. Chamber of Commerce Foundation.
For example, Stan Litow of IBM has been working on an education model to make major changes on a local scale through strong community partnerships. Litow says that IBM looked at a training model that equips young people not only with a diploma but a mentor, job skills and paid internships, allowing them to transfer into meaningful jobs. Thousands of students across the country now benefit from this model, but without the buy-in of local officials it wouldn’t have happened, says Litow, and it wouldn’t have gone national, in part because from the outset it was not built to be one program; it was meant to be replicated by other schools and localities according to their needs. The result is that these students are on solid career paths with few dollars spent – and now other companies are pursuing this transformative change.
James S. Marks of the Robert Wood Johnson Foundation says that in looking at how to better health and health care, the Foundation considers the issue on a local and global scale when deciding how to help foster the changes that are needed. Given that health care in the US is twice as expensive as in other developed countries, and because those rising costs threaten our economic competitiveness, we need to help our nation define a culture of health that is broader. While people who work in the health fields may think good health is what people want, they  really they want to be part of a community they feel connected to. So community development with the collaboration of the private business sector can elevate successes and help a community come together.
Bo Miller of Dow Chemical described a similar approach in contributing to community success. By thinking strategically to integrate efforts, Dow aligns its resources to address the needs of the community, in part by assessing the environment and identifying gaps and potential successes to further its economic development. Communities have accepted Dow’s partnership because they know it makes smart business decisions that advance the community’s needs.
Equality of opportunity and social cohesion are most viable through strong community partnerships.
Using a community-based approach makes good sense from a business standpoint and from a development angle. As Global Communities has learned in its more than 60 years, no one sector can solve the complicated problems that afflict the most vulnerable. But by working collaboratively and identifying and leveraging true partnerships, we can develop more models of success that help more people – both in the US and beyond.