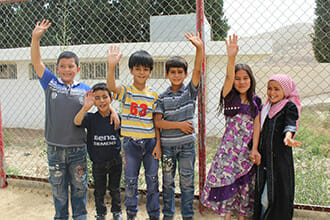 Community-Led Project Results in Safer School for Bseira Students
For more than three decades, Bseira Mixed Primary School has educated thousands of students in the heart of a beautiful mountainous landscape in Bseira,Tafileh, Jordan. But until recently, there was no wall surrounding the school, and as a result, the playground was not safe for outdoor activities since wild animals and herds of sheep entered the school on daily basis. Students also risked falling into the steep valley, worrying their parents. Moreover, nothing prevented children from other schools from coming into the school and possibly causing trouble.
Fortunately, the Bseira Community Enhancement Team (CET), a group of volunteers elected by Bseira residents in 2013, is working with the local government to identify, monitor and maintain community projects through the USAID Community Engagement Project (USAID CEP). Improving schools is one of USAID CEP’s priorities to enhance the learning environment in Jordanian schools, in part by addressing the challenges and pressures caused by the influx of Syrian refugees to the Kingdom. Community members through a survey named building the wall at the Bseira School a top priority, and on June 4, 2014, the Bseira community celebrated the successful completion of the wall. Today, the wall has made a tremendous difference to children and adults alike.
“I’ve been a Bseira School student and I know exactly the type of challenges faced by the students of this school,” said Hanan Al-Zeidanyeen, Bseira School Principal. “Today, I am proud that my dream and the dreams of all students has finally come true with this project.”
And Hashem Al Safasfeh, a member of the CET, said the wall has been a pressing need and a dream to Bseira community members. “This project demonstrates the power of the community working hand in hand to improve the lives of residents to  accomplish a common goal. “With the completion of this project, the Bseira community has not only gained a wall but also the know-how and necessary skills of community mobilization that will increase their resilience toward current and future challenges,” he said.
One student said the school is much improved with the wall. “Before, we could not play in our school playground because we were afraid of wild animals there, and my mother used to be scared to send my little brother to school because he might fall into the valley,” she said. Added another: “This wall has made us and our parents feel much safer in the school, and we can now play freely without fear of animals or people who might break into the school.”
CET members have also successfully mobilized additional resources from the National Microfinance Bank in Tafileh, which sponsored the completion ceremony and donated playground games for the school. The Ministry of Agriculture has also donated trees to be planted in the school playground and many volunteers from community members have supported the project throughout its implementation.
USAID CEP is a three-year project funded by USAID and implemented by Global Communities in collaboration with Jordanian partners Al Jidara and Jordan River Foundation. USAID CEP builds stronger communities to address evolving challenges. It engages community members to address community needs and stressors caused by regional instability and transition associated with domestic policy reform, economic conditions and demographic changes. The project works in Irbid, Mafraq and Tafileh governorates.