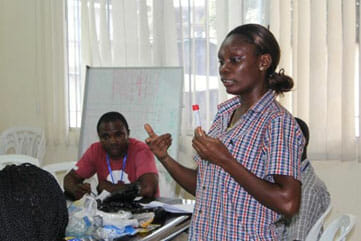 Delegates from Sierra Leone (left) and Liberia (right) gather to discuss cross-border coordination.
September 3rd, the WHO declared Liberia Ebola-free for the second time after an isolated resurgence of cases in Margibi County last June. Although minimal and stable, cases continue to be reported in Guinea and Sierra Leone. As the three countries move forward out of the emergency response stage to restore and strengthen health systems, cross-border coordination and disease surveillance remain critical priorities to maintain a zero case count and share information and best practices. Through the USAID-funded Assisting Liberians with Education to Reduce Transmission (ALERT) program, Global Communities has led border disease surveillance activities in Bong, Nimba, Lofa, Grand Cape Mount and Gbarpolu Counties.
On September 4th, Liberia hosted the most recent cross-border meeting, supported by Global Communities, in Bo-Waterside, walking distance from the Sierra Leone border in Grand Cape Mount County. Liberian and Sierra Leonean government officials and traditional leaders attended the meeting in addition to international and local partners. Upon welcoming attendees, a representative from WHO stated “we are here with the purpose of strengthening collaboration between in epi surveillance preparedness and response to ensure that both countries reach and stay at zero [cases].”

Dr. Cooper presenting on the epidemiological situation in the county.
Dr. Lori Cooper, County Health Officer (CHO) began the meeting with an overview of the epidemiological situation in Grand Cape Mount highlighting progress made and remaining challenges. “Partners and the County Health Team have worked hard to implement, monitor and review activities through many sleepless nights to achieve zero cases,” said Dr. Cooper. She lauded Global Communities for supporting the County Health Team through burial teams, triage stations at crossing points and Community-Led Total Sanitation (CLTS). Dr. Cooper also highlighted the critical importance of Global Communities’ role in sponsoring Community Health Volunteers and community-based surveillance activities in collaboration with IOM.
Another point of discussion was the need for psychosocial and physical support services for orphans and EVD survivors as well as the restoration of health services as a vital next step that will require continued support from government and partners. Dr. Cooper noted that the way forward will not be easy, especially as it relates to dead body management. “While we are at zero, we still have challenges ahead of us,” she said. “Changing behavior is difficult, especially when it affects tradition. Some communities are still resistant to swab and burial teams and we must continue to work with Ministry of Health (MOH) and Traditional Leadership to ensure communities understand the importance of dead body swabbing,” she continued.

Global Communities’ Senior Burial Team Trainer, Izetta Williams, conducts a swab collection training session to a group of Environmental Health Technicians in response to the new government policy on dead body management.
With only six new cases in Liberia since last March, community opposition to burial teams has noticeably increased and the MOH and partners recognize that there are sustainability issues with continuing with to bury all bodies using burial teams. With the shift in policy from the central MOH to go from “safe burials for everyone” to “swabs for everyone,” Global Communities has and will continue to be a leader in this space by supporting Environmental Health Technicians (EHTs) in all 88 health districts to oversee swab collection in communities, health care facilities and funeral homes through the ALERT program. In addition to providing a case detection and response mechanism, this new policy will allow for communities to return to their own traditional burial practices after swabs are collected.

Dorleh presents on Global Communities’ activities in Grand Cape Mount.
Global Communities’ County Advisor for Grand Cape Mount, Hilary Dorleh, presented on activities including logistical support to the County Health Team and EHTs, support to check point screeners, CLTS and a strategy for maintaining zero. “Just because we are scaling down burial teams does not mean we are done,” Dorleh noted. “Global Communities is here and will continue to work with the County Health Team, EHTs and Chiefs to lead the swab collection process to protect communities from future outbreaks.” Several leaders, including the Paramount Chief of Porkpa District and the Bo-Waterside Commissioner stood up and reaffirmed their commitment to supporting swab collection. In a related development, members of the National Council of Chiefs and Elders are currently touring six southeastern counties, with support from Global Communities, to educate people on the importance of dead body swabbing as an Ebola case detection and response measure.
Toward the close of the meeting, a representative from the Sierra Leone Security Forces expressed his gratitude. “We want to thank the Liberian government, people and partners for their contributions to fighting the disease,” he said. “We would not be where we are today without the collaboration we have had throughout this fight.”
Action points agreed upon by both national delegations included the following:

Continue and improve coordination between the County Health Team and partners

Look into issue of testing semen of male survivors, who make up 37 of the 50 survivors in Grand Cape Mount, for EVD

Deputy Director Amos Gborie closing the meeting and thanking participants and partners.
Deputy Director for MOH’s Department for Environmental and Occupational Health, Amos Gborie closed the meeting with a message from the central government. “At the national level, we are impressed with Grand Cape Mount as this county has led an effectively managed surveillance system with minimal involvement from the central level,” he said.
Gborie thanked Global Communities for its work nationwide and stressed oral swabbing as the most important policy moving forward calling it “the secret to interrupting Ebola.” “Central MOH reaffirms its support for cross-border engagement moving forward until all countries reach zero and are Ebola-free,” he concluded.