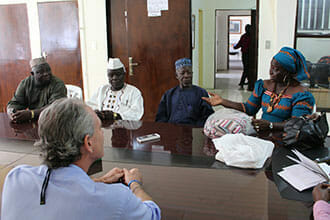 MONROVIA, LIBERIA – Global Communities’ Director of Humanitarian Assistance, Pia Wanek, received special recognition and honors from the National Traditional Council of Chiefs and Elders of Liberia (NCCEL) on the final day of her most recent visit to Liberia. Many of the country’s top traditional leaders gathered at the NCCEL headquarters to express their gratitude and thanks to Wanek for the key role she and Global Communities played during the fight against Ebola through the USAID-funded Assisting Liberians with Educations to Reduce Transmission (ALERT) Program.
The NCCEL, comprised of the highest-level traditional chiefs in Liberia, has a strong and important role to play in advocacy, outreach, education, and behavior change at the community level throughout Liberia. As perhaps the most influential and trustworthy authority at the community level, the NCCEL has been instrumental in the success of ALERT by garnering community acceptance and support for Global Communities’ safe burial teams and Disco Hill Safe Burial Site as well as other Ebola prevention measures including cross-border monitoring, Community-Led Total Sanitation and improved hygiene practices.

Chairlady Mamusu Coleman, Head of Human Resources and Women’s Affairs for NCCEL, welcomed Wanek as well as Global Communities Country Director, Warner Passanisi and Montserrado Program Manager, LeRoy Johnson. “We are all in our own home today,” said Coleman. “Global Communities is our partner, our brother, our sister, our son and our daughter. They have made this house their own. As traditional leaders, we are grateful people; we give honor to those whom honor is due and today we thank you,” she continued.
Also in attendance were Chief Boakai Zoulu (Vice Chairman of Culture and Tradition), Chief Momo Kiazolu (Vice Chairman for Chiefs’ Affairs and Reconciliation) and Chairlady Setta Saah (Coordinator of the NCCEL), who all welcomed Global Communities and Wanek as family on behalf of Chief Zanzan Kawa.

After welcoming guests, Chairlady Saah presented Wanek with a traditional Chief’s gown. “We want to give our sister a small piece that she can carry back to her home to remember us by. Then she will always know that she was with her people, in her own house,” said the Chairlady while placing the gown on Wanek.
At the end of the ceremony, the Chiefs and Elders gave Wanek the honorary name “Mamusu Coleman” after the Chairlady for Women’s Affairs as a sign of respect.
Upon addressing the Council, Wanek expressed her own thanks: “This is an amazing honor for me to share with you. The world knows what the Liberian people have done during this crisis. It is your people and you the traditional leaders that have made this work possible. You fought Ebola and you won and we commend you. Thank you so much for this honor.”