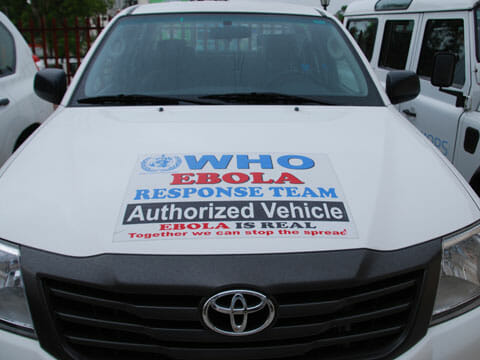 EBOLA Is Real!
By Josh Balser
Josh Balser is a member of Global Communities’ Ebola Response Team in Liberia. As he supports the ongoiong efforts in Liberia, he will also be blogging and providing regular first-hand accounts of the situation on the ground and how communities across the country are living with Ebola.
You can see the signs everywhere. On churches. In front of supermarkets, hotels and banks. There is, by all appearances, a national campaign to convince people that 1) Ebola is, in fact, a real thing and 2) to do their part to break the chain of transmission. The campaign, at first, seems stranger than just the abundance of signs, but even more so with the amount of international attention this outbreak is getting. This is the largest Ebola epidemic in history and has affected communities all over the country – what more evidence could you need?
It has been a just over a week since I first arrived in Liberia, and I have spent most of my time learning about all the moving pieces of our projects, the geography of Liberia and how all the key players are coordinating a response. Most importantly it has been an exercise in understanding how the effects of a 14-year civil war can influence a population’s perceptions of this thing that is taking the lives of so many. Can you imagine waking up one day to see six people walking through your community in hazmat suits, one of whom is spraying an unknown liquid into the air? What would you think?
Now consider being a Liberian living in the rural areas without access to expert medical correspondents and trustworthy official sources appearing on the nightly news. The case for a national campaign to convince becomes all too real. The case for more educational outreach and transparency about response efforts becomes paramount to slow the rate of new infections, and to break the chain.
And it is not just Liberians or healthcare workers that shoulder the burden. We joke around the dinner table that you shouldn’t “touch your friends.” But we don’t. There is no handshaking when you meet someone for the first time, no high-fiving when your team scores a point in volleyball. Don’t touch your friends. It’s a steadfast rule that is a constant reminder that Ebola is real. The signs are just there for good measure. I’ll be blogging from Liberia regularly to give a ground-level view of how communities across the country are living with Ebola.