Emphasizing the Importance of Hand Washing in Ghana 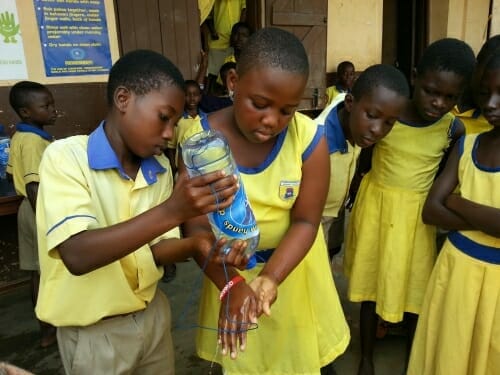 Emphasizing the Importance of Hand Washing in Ghana
This story originally appeared on SpyGhana.
Children of Jumapo Methodist School practice proper hand washingh. Photo by Peter Serinye.
Mrs. Theodora Adomako-Adjei, Head of Extension Services of Community Water, and Sanitation Agency, has launched the 2014 Global Hand Washing Day at La Anglican Junior High School (JHS). It was aimed at emphasizing the importance of hand washing among the school children.
She said the day’s theme: “Choose Hand Washing, Choose Health,” was in commemoration of this year’s Global Hand Washing Day under the United States Agency for International Development (USAID), and the Global Communitie’ Water, Access, Sanitation and Hygiene of the Urban Poor (WASH-UP) programme.
Mrs. Adomako-Adjei said hand washing is an effective means to prevent diseases hence the need for school children to be well informed on good hygiene practices.
She said personal hygiene and good sanitation have become problems for many people, explaining that school children have been identified as the best channels of information dissemination to ensure effective hand washing with soap under the Global Hand Washing programme.
Mr. Joseph K. Asante, Global Communities WASH-UP Director enumerated some of the objectives of the USAID and Global Communities WASH-UP programmes as to increase household access to drinking water supply and sanitation facilities and also improve hygiene and sanitation behaviour among the people. He said five beneficiary communities and schools are Avenor, Ayidiki, Nima East and West in Accra and Takoradi, adding: “Provision of the facilities in these areas is expected to improve hygiene education in the schools and proper use of water and sanitation in the areas.”
He said USAID and Global Communities have also partnered La Dade Kotopon Municipal and Accra Metropolitan Assemblies to increase access to safe drinking water while ensuring good hygienic behaviours to reduce the number of diseases in the communities. Mr. Asante said La Anglican has benefitted from two 20,000 litre tanks for water storage and two 10,000 litre tanks also for rain harvesting to respond to the problems identified in the school, such as lack of water and toilet facilities with funding from USAID through Global Communities.
“Distribution of Aquatabs to the people of La, awareness in respect of the cholera outbreak and education on hand washing with soap were some of the health interventions, the people have benefitted through the Global Communities,” he said.
Mr. Geoffrey Okumah-Kotie, Head teacher of the La Anglican JHS, expressed gratitude to USAID and Global Communities for coming to the aid of the school, adding: “With a total of about 1,200 students population, I believed they will greatly improve sanitation conditions in the school.
He pledged that he would facilitate vigorous environmental sanitation and hygiene campaigns on hygienic practices among the school children to improve basic knowledge and human behaviour.