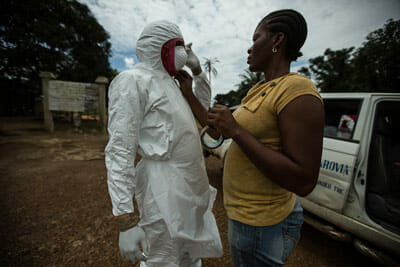 Varbah, a member of the Liberian Red Cross and Global Communities burial team, listens to the mother of Phelica Anthony, 6, explain the events leading up to her daughter’s recent death. Although Phelica was taken to several hospitals, the cause of her death was not determined, and now her father is exhibiting symptoms of Ebola. Photo by Morgana Wingard.
What do you say to a mother who just lost her child? To a neighbor who just lost her best friend? How do you comfort them before you carry away the body of their loved one in a black bag in the back of a dark green pick-up truck? Varbah Dolley faces these scenarios six days a week. Varbah is tough – like most Liberian women who have lived through two civil wars. She is now fighting another a war, against an enemy she can’t see.
Varbah is a member of a Liberian Red Cross burial team. Funding from USAID and support from the U.S.-based NGO Global Communities is providing burial-team support activities in all 15 counties of Liberia, as well as engaging with communities to share information on proper hygiene practices and preventing transmission through workshops, community meetings, and radio campaigns.
From the moment they start showing symptoms, someone who has contracted the Ebola virus is highly contagious. The virus is spread through direct contact with bodily fluids including vomit, diarrhea, blood, and saliva. After the person dies, the body is even more contagious.
In Liberia, rituals to prepare bodies for burial are contributing to the rapid spread of the virus. The dead body is typically washed and dressed by multiple people before being carried to a grave — a ripe situation for the virus to spread. Graves are also important landmarks for Liberians. Decoration Day, a government holiday, is dedicated to visiting and decorating family graves. It’s where they can speak with their ancestors and commune with them. As the burial team prepared to take one body, I heard a woman wail: “I will have nothing to decorate on Decoration Day.”

Varbah helps Melvin, a member of a burial team, put on his personal protective equipment and ensures there are no gaps from the outside world to his skin before he goes in to pick-up the Phelica’s body. Photo by Morgana Wingard.
To stop the spread of Ebola, burial teams have been mobilized across Liberia to provide safe disposal of contagious bodies, which often includes cremation. With the epidemic on the rise, every dead body is now considered an Ebola body. Varbah’s team leaves central Monrovia every morning to respond to reports of deaths. These calls often lead them to communities deep in rural Liberia. Last week, we drove for more than two hours over rough dirt terrain to reach Arthington – which also happens to be the birthplace of former warlord Charles Taylor.
Varbah climbs out of the mud-splattered jeep and calmly walks over to a crowd with her notebook and pen. She jots down as much information as possible about each patient and their family for the report she submits every evening. “I know what you people are going through. But take courage,” she counsels the family of 6-year-old Phelica as they describe the events leading up to her untimely death. Phelica became inexplicably sick while playing outside. Her mother carried her to multiple hospitals for treatment. After spending a couple days at one hospital where they ran several lab tests, the doctor said she would not survive and Phelica died on the way home. Her father, who had cared for her, later began exhibiting symptoms of Ebola. A health team transported him to an Ebola treatment unit the day before we arrived.
Melvin Payoh, the assistant team leader of the burial team,suits up like an astronaut in the middle of the hot, rural village as onlookers gather and stare. A few minutes after disappearing past the first row of earth-walled homes, the team returns carrying a black bag. Everything about this Ebola outbreak feels unreal until men in white spacesuits walk through a town with a body-filled bag. A mother wails, “My baby, O. My baby, O.” Then it is painfully real. Numbers have names. Tears flow. Relatives fall on the ground. Hands flail. Melvin and his team lay  Phelica’s little body in the back of a dark green pick-up truck.Like many in West Africa, when it comes to the current public health crisis, Phelica’s family is suspicious.“You don’t know what killed the person because they are hiding the truth from us,” Varbah tells me later in the car.
I think Varbah and Melvin have the hardest job fighting this Ebola outbreak. They face death six days a week in order to save more lives. When I asked Varbah why she applied for the position she replied, “I do this for my country.”
To see additional photos and read past blog posts, please visit: http://blog.usaid.gov/ebola/ (Please note: some of the photos may potentially be upsetting to readers.)