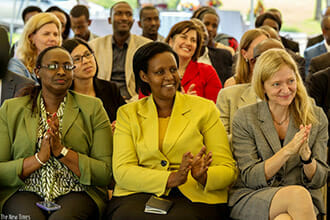 Anne Mugabo, Director-General of Labour and Employment at the Ministry of Public Service and Labour (L), Oda Gasinzigwa, Minister for Gender of Family Promotion and Erica Barks-Ruggles, US Ambassador to Rwanda at the launch of the project in Kigali yesterday. (Photo by Timothy Kisambira)
The United States Agency for International Development (USAID), has announced a $37-million (about Rwf26.6 billion) five-year grant toward uplifting 50,000 poor families out of poverty.
The funds will be channelled through a project dubbed, ‘Twiyubake,’ to benefit at least 250,000 individuals in different ways.
The project, which will be implemented by Global Communities, aims at strengthening the protection of vulnerable groups and connect them to the health, social, and educational services that can enable them to improve their livelihood.
Those to benefit include people living with HIV, orphans and vulnerable children, and poor families, especially women or widow-headed households.
“By empowering vulnerable populations, the Twiyubake project will be contributing to the Rwandan government’s vision of the second Economic Development and Poverty Eradication Strategy but is also meant to look at child related policies, strategies and plans that the government is trying to put in place,” the envoy said.
Salient role
The Minister for Gender of Family Promotion, Oda Gasizigwa, took note of the choice of intervention made by Global Communities, saying it addresses the government’s most binding constraints to the growth and prosperity of the vulnerable families, especially from the bottom.
Referring to the targeted beneficiaries of Twiyubake project, Gasinzigwa said; “The Government of Rwanda has made significant progress in the direction of addressing the rights and needs of children in Rwanda, in partnership with all its stakeholders.”
“Any efforts that support the Rwandan families to live to their full potential are appreciated… there is no doubt that this project is a direct response to some outstanding issues we have to ensure stable and productive families as highlighted in the national family policy,” the minister added.
The project is designed around the three fundamental pillars of; a family-centric approach that strengthens the knowledge, skills and attitudes of parents; a robust continuum of response to provide access to the range of services needed as household members grow; and  an enhanced capacity-building model that goes beyond the traditional service delivery by ensuring, at all times, country ownership.

Chief of Party of Global Communities Milton Funes gives his remarks at the US embassy.
The Chief of Party of Global Communities, Milton Funes, said they have partnered with three international organisations that will provide technical leadership in different programme components.
The three international organizations are Partners in Health, AVSI, and Plan International.
“Twiyubake will incorporate behaviour change activities throughout, assisting both men and women to improve their ability to care for family members,” Funes said.
“They will include parental education activities on family decision-making, nutrition, early childhood stimulation, the ‘first 1000 days campaign’ and other topics, embedded within economic strengthening activities.”
Speaking at the launch of the new project, the US Ambassador to Rwanda, Erica Barks-Ruggles, said the project seeks to build community resilience with a particular aim of protecting vulnerable communities from poverty, diseases and disasters.