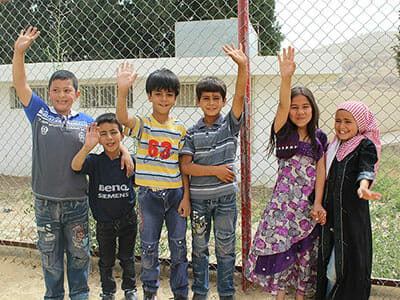 Global Communities staff oversees unloading of agricultural inputs to support families in Northern Syria.
Since the start of the war in Syria more than four and a half years ago, 11.7 million Syrians have fled brutal violence, including more than four million who have crossed into Lebanon, Jordan, Turkey, Egypt and Iraq . These four million are among the nearly 18.1 million refugees around the world who often live without their basic needs being met, such as sufficient food, medical care, and shelter.
Global Communities has been responding to the current crisis since early 2013 by supporting local farmers and providing shelter improvement kits to Syrians who have been displaced – whether internally or abroad, and by helping host communities and local governments strengthen their ability to cope with increasing demands on resources.

SYRIA –Supporting Farmers and Internally Displaced Persons in Northern Syria
With an operational base in Southern Turkey, Global Communities works with local Syrian NGOs to provide food security assistance and shelter to displaced and conflict-affected communities in Northern Syria.

Kitchen garden to promote food security among displaced families.
Our local partners are responsible for working with communities inside Syria, while we are responsible for program management. This cross-border approach of assistance delivery via local Syrian partners is a widely accepted model of assistance to areas that are largely inaccessible to international NGOs. More importantly, this approach ensures that we are working through local groups with intimate knowledge of a specific area, mitigating security concerns and facilitating access.
To date, we have provided over 2,600 vulnerable households with emergency shelter improvements and winterization kits. Additionally, we have provided 1,768 farmers and their families, and over 9,000 internally displaced persons with seeds, fertilizer, and tools as a way to address the immediate food security and livelihoods needs of conflict-affected people while laying the groundwork for early recovery.

JORDAN – Supporting Host Communities
With a domestic population of only 6.5 million, Jordan has received more than half a million registered Syrian refugees since the start of the war in Syria more than four and a half years ago. Syrian families are moving in wherever they can, being absorbed into Jordanian host communities, putting pressure on already strained local economies, municipal services, and natural resources. While this is happening primarily in the north of Jordan, which has absorbed the majority of refugees, the southern region of the country faces development challenges of its own, including lack of employment opportunities, water scarcity, and rural poverty. In a massive refugee crisis like this one, it is essential to focus on refugee needs. But we must also address the needs of host communities, especially in light of so many new arrivals.

Projects like school improvements benefit both host communities and refugee populations living in Jordan.
Global Communities, working in partnership with USAID and Jordanian organizations Al Jidara and Jordan River Foundation, is addressing host community challenges and strengthening their ability to cope with the demands they face. In April 2013, we launched the USAID Community Engagement Project (CEP) in Irbid and Mafraq, along the Syrian border, and in Tafileh, in the south, to help Jordanian communities meet pressing needs during this time of change. Knowing these communities were already under stress, our teams visited towns and villages in Jordan to talk with community leaders and members to quickly determine how rapid fixes could be found to meet community needs. Right away our teams started working with local residents, conducted grants meetings for organizations in each governorate, and approved and funded 29 different projects. Each project provided a solution, or support, for a need identified by the community.
The projects reflect the priorities of each community and benefit longtime residents and refugees alike: better systems for trash collection, including formal services as well as community clean-ups; creation or improvement of youth recreational opportunities, including sports clubs; enhancing public spaces that had suffered neglect; and improvements to schools, especially for girls. Global Communities is also taking steps to tap the strengths of women in improving their communities. Women who want to work are often limited by the lack of access to good childcare that would enable them to work outside their homes. Consequently, one project we supported was the opening of a licensed nursery. The nursery is fee-based and therefore sustainable, and it employs licensed providers directly from the community. This has helped create jobs in the community and made it possible for other women to work outside the home, increasing household income.

Shelter Assistance Program beneficiary in Lebanon
Global Communities partners with the United Nations High Commissioner for Refugees (UNHCR) to assess, select, and rehabilitate homes and distribute shelter materials to Syrian refugee families, as well as upgrade sanitation facilities, promote hygiene, and rehabilitate schools. Shelter is a major problem in Lebanon, which has received more than one million Syrian refugees. Limited housing options and high demand are causing a spike in cost both for Syrians and Lebanese communities. Refugee camps are declared illegal by the government of Lebanon, so Syrians rely on apartments, collective centers, and Lebanese host families for places to live. Those paying rent do so at an inflated cost, depleting their savings and struggling to make ends meet. Global Communities’ Shelter Assistance Program helped negotiate contracts with Lebanese landlords to repair and build extensions to homes for Syrian refugees. Agreements were made to have families live rent-free in the homes for one year, allowing families to save money as they coped with the rising cost of living and limited income opportunity in Lebanon.

How can you help?
Donate today. Your donation gives them hope. Through your support, we are able to meet the needs of the most vulnerable refugees and help them create a more stable life.