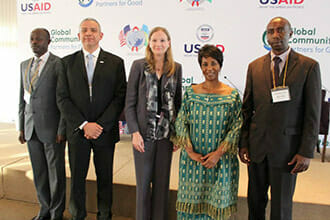 Global Communities Celebrates Legacy of USAID Higa Ubeho Program
KIGALI, RWANDA – Global Communities today, Thursday February 5th 2015, held an end of program Conference at Hôtel des Mille Collines to reflect on the Learning and Legacy of the Social Services for Vulnerable People Program, commonly known as USAID/ Higa Ubeho (Be Determined and Live). Honorable Gasinzigwa Oda, Minister of Gender and Family Promotion served as Guest of Honor while Adriana Hayes, Acting Deputy Mission Director, from USAID delivered the closing address. Initiated in 2009, the five-year program is funded by the U.S. Agency for International Development (USAID) through the President’s Emergency Plan For AIDS Relief (PEPFAR). The program activities were conducted in 23 districts and reached over 75,000 households.
The conference is organized under the theme: Learning and Legacy, and brings together program beneficiaries, volunteers, implementing partners, local authorities and other stakeholders supporting vulnerable populations. It serves as a venue for dialogue about the impact the program has had on some of the most vulnerable Rwandans, challenges and lessons learned.
The conference also highlights some of the key achievements of USAID/Higa Ubeho Program where over 137,000 individuals were served with various program services including:

52,763 vulnerable children who were supported with school materials and health kits,

10,853 children under the age of 5 were enrolled in early childhood care and development programs.

6,000 youth were provided with a 1-year scholarship in vocational programs.
Using an integrated approach to development, every household in the program was invited to be part of a savings and lending group, then invited to join a Farmer Field School and a nutrition group thereafter. Overall about 87 percent of the households reached, have learned and adopted bio-intensive agriculture techniques.
The program’s impact assessment also reveals that most the households (almost 83 percent) included in a three-year longitudinal cohort study have graduated or maintained higher levels of resiliency compared to when they joined the program.
Commenting on the conference, the Country Director for Global Communities, Milton Funes, said: “the conference is a unique opportunity to bring all key program stakeholders together, beneficiaries, volunteers, civil society organizations and local officials, to discuss and learn how the USAID Higa Ubeho Program has impacted their lives and communities, but also to know how they plan to continue supporting other vulnerable families now that they have acquired the knowledge and capacity to do so.”
During the last few months Global Communities organized similar events in all the districts where activities were implemented, celebrating achievements and recognizing the role of local authorities, volunteers and beneficiaries in contributing to the success of the USAID/Higa Ubeho Program.