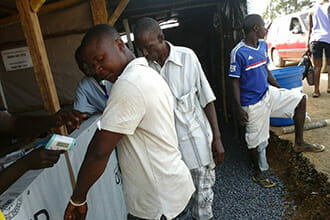 An IOM staff member uses an infrared thermometer to take the temperature of a traveler crossing the newly-opened border from Liberia to Sierra Leone on Thursday. Global Communities constructed screening and triage stations at the Bo Waterside border crossing to guard against Ebola.
But the opening was not typical of eased cross-border travel.
At Bo Waterside, a small town on the Liberia side of the Mano River – which divides Liberia and Sierra Leone – the sounds on Wednesday were not of trucks and taxis sputtering legally across the border for the first time since August, but the sound of Global Communities hammers preparing Ebola screening and triage stations.
On Wednesday, Sierra Leone had yet to declare its side of the border open after the closure aimed at containing the epidemic. While Sierra Leonean immigration officers waited for official word to open, U.S.-based nonprofit Global Communities worked to ensure that travelers from both sides of the border are effectively monitored for Ebola symptoms. The Sierra Leone side of the border opened Thursday.
“When we heard the border was opening, we met with the immigration commander, county superintendent and district commissioner to see how we could support the reopening,” said Global Communities Contact Tracing Coordinator Abbiseh Pitte. “They told us they did not have a place to monitor and triage people coming in and out.”
On Sunday, Global Communities – with support from USAID and in collaboration with the International Organization for Migration (IOM) – began construction of two screening and triage stations at the Bo Waterside Border crossing.

IOM Hygienist Mustapha Wiles tests out a disinfectant sprayer on Global Communities Contact Tracing Coordinator Abbiseh Pitte in preparation for border opening.
“We expect an influx of people,” said Charles Brooks, commander and chairman of Joint Security at Bo Waterside, adding that the opening of the border will encourage more individuals to cross legally. “It’s safer that way; we need to take preventative health measures and have a more secure border.”
Part of those health measures are addressed by the screening and triage stations. Both on Liberia’s side of the bridge, one station is designated for those leaving Liberia and one for those entering. Plastic orange fencing guides travelers toward hand-washing stations. With clean hands, they continue to an IOM nurse-staffed wooden booth, lined with USAID tarps, to have their temperatures checked with a ubiquitous infrared thermometer.
“If people don’t have a high fever, they can go on to the immigration building and cross,” said Global Communities Logistics Officer Winston Paye. “If they have a high fever they have two options – wet and dry holding rooms.”
He explained that individuals with a temperature higher than 38°C but no other Ebola symptoms are held in the “dry” room behind the temperature checking booth and are retested several minutes later. If their temperature remains high, they are referred for treatment. Those with additional Ebola symptoms are triaged in the “wet” room and transported to the Sinje Ebola Treatment Unit, about a 30-minute drive into Liberia from Bo Waterside.

Economic activity has suffered with closed borders. A Liberian man waits with a shipment of water sacks on the Mono River Bridge. With the Sierra Leone border still closed on Wednesday, he could not take his truck across. He waits for a Sierra Leonean contact to pick up the shipment and complete the delivery.
Global Communities also supports the disinfection team and on-call ambulance on the Liberia side of the crossing point. Paye said that border officials from Sierra Leone crossed the river to see how the screening and triage station was being constructed by Global Communities to bring ideas back to his team.
“The border reopening is good for economic reasons,” said IOM Infection Prevention and Control Supervisor Romel Chineh, who was working with Global Communities staff to oversee construction of the screening and triage stations. “But one thing we need to be clear about is infection prevention and control. We need good coordination.”
With the sudden Feb. 20 announcement to open the borders, much remains in flux. Meetings with Liberian and Sierra Leonean health, security and administrative officials as well as international organizations are ongoing to work out the details of standard operating procedures, referrals and treatment options.
“While there was great jubilation from the local population on both sides of the border, the county is awaiting national standard operating procedures for cross-border surveillance implementation,” said Global Communities Program Manager Michael Fogbawa. He is coordinating border-opening response in Grand Cape Mount County and continues to participate in cross-border meetings to determine infection prevention and control mechanisms.
“We are continuing to improve the screening and triage station by putting in solar lighting and toilet facilities and are preparing to start building stations at the county’s other crossing points,” he added.

As word gets out that the border is open, immigration officials expect high volumes of travelers at the Bo Waterside Border Post – good news for the town that relies on border traffic for commerce.
Fogbawa is part of a larger Global Communities team working to roll out a comprehensive cross-border response in Liberia’s five counties that border Sierra Leona and Guinea – the two other countries most impacted by Ebola. To date, border opening applies to Sierra Leone and Guinea, and it remains unclear what will happen on the border with Ivory Coast.
“To address borders opening, we are not only partnering with Liberia’s immigration service to support official border crossing points, but we are also working at the community level to support surveillance and coordination where people cross informally,” said Fogbawa. Movement between Liberia and Sierra Leone and Guinea is fluid, and borders are lengthy, remote and porous.
Global Communities is working closely with traditional leaders and local health officials to track informal border movement in far-flung communities to ensure that community health workers monitor those who may have Ebola and ensure they receive treatment. Additionally, Global Communities is coordinating and supporting meetings among town-level traditional leaders and between Guinean and Liberian traditional, health and administrative officials to foster localized coordination and information sharing.
Back at Bo Waterside, Musa Kamera is pleased to see activity in the tiny town that grew around the crossing point. With a shop a few hundred yards from the Mano River Bridge, she sells popcorn balls, pasta, rice and other snacks and staples. The sound of the cars and trucks she expects to see in the coming days means income. “Business has been bad with the border closed,” she said. “Happy, I am happy for the border to open.”