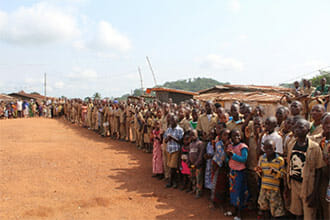 Hundreds welcome the Liberian delegation to Bossou, Guinea.
On March 24th Global Communities staff attended an historic bilateral meeting on cross-border surveillance in Lola, Guinea. This was the first of six such gatherings between Nimba and Lola and the latest in a series of talks held between the two countries to strategize on how to best monitor borders and ensure Ebola does not cross unnoticed. Two similar meetings have been held in Lofa and one in Bong. The meeting in Lola represents a continuation of collaboration between both countries on cross-border surveillance and demonstrates that all three bordering counties of Liberia are now actively engaged with the Guinean government. Three talks will be held in each country and the next is planned for next week in Sanniquellie.
Last June, Nimba reported its first Ebola case in Ganta City and has since reported 329 confirmed cases and 157 deaths in five of its six health districts. Sanniquellie-Mah, which shares a border with Guinea, was Nimba’s hardest hit district. The last confirmed case, which traveled from Guinea, died on December 25th and no cases have been reported since in Nimba. Lola Prefecture has reported 97 confirmed cases with 75 deaths to date, representing a 77.3% fatality rate. Nimba County has generally porous borders with nine official border crossings and 49 border communities, 21 of them along the Guinean border. Communities on each side are closely related, both socially and economically and pass freely, underscoring the necessity of improved and well-coordinated border surveillance.

The Prefect of Lola welcomes the Liberian delegation.
The main Liberian delegation included Nimba County Inspector, Reginald Mehn and Nimba County Superintendent, Fong Zuagele. Paramount Chief for Sanniquellie-Mah District, Alan Flomo and Chief Peter Barlon, Chairman of the Nimba Chapter of the Traditional Council also attended in addition to national police and NGO (Global Communities, LNRC, WHO, CHESS, IOM, DRC, UNMEER, CDC) representatives.
Upon arrival at the border, the delegation was welcomed by the townspeople of Bossou with cheering, singing and dancing. The Governor of N’zerekore and the Prefect of Lola welcomed the delegation among the cheering crowd expressing excitement and gratitude for the visit. When Nimba Superintendent Zuagele addressed the crowd in the local language he said “We are the same people. We speak the same language. You are my brothers and I am your brother. I am humbled and grateful to be here today to work toward a collective solution to our situation.”
While this one-day meeting is only the first step to solve this issue, it represents an important step for both countries.

The Nimba Superintendent addresses the crowd in the local language.
“Thank you to the representatives for asking for this meeting. It shows how we can cooperate to fight Ebola. It shows how Liberia cares for Guinea and how Guinea cares for Liberia,” stated the Lola Prefect. He continued, “Both of our presidents know we need to fight together. The Superintendent of Nimba even addressed us in our local language at the border. We share the same interests, traditions, culture and love for one another. Let us gather today and talk about reality. Let’s talk about how to fight Ebola….Ebola is not just a health issue. It is a social and economic issue as well. We need to stay vigilant. We need to remain awake to ensure that Ebola is nothing more than a bad memory.”
Nimba Superintendent Zuagele noted that his one-year tenure as Superintendent has been a challenging year as he was inaugurated just before the outbreak. He also expressed gratitude to local and international partners and the United States government for standing with Liberia throughout its fight against Ebola. “We could not have made this progress without you,” he said. “We are also grateful to be received by the people and government of Guinea,” he continued. “As leaders we must exercise flexibility. This is an unusual enemy that requires an unusual strategies to defeat it. We must avoid unnecessary bureaucracy and take real action if we are to be successful….Ebola has no regard for international boundaries. We have boundaries but we are the same people. We must embrace this and fight this common enemy together.”

Dr. Esther Muwanduza, WHO, presents on Nimba’s current border surveillance structure.
Both delegations presented on their counties’ current epidemiological situations, challenges and recommendations. Coordination of interventions between NGOs that do similar work remains the biggest challenge according to Guinean officials while improved information sharing was identified as a barrier by both delegations. The Guinean delegation also noted that they lack access to resources that allow them to disinfect all houses affected by Ebola.
The Liberian delegation suggested providing regular situation reports between counties and training the border communities, especially those affected by Ebola, in contact tracing and active case finding as a way of improving information sharing. Continued support for gCHVs, community mobilization with strong involvement of traditional leaders and CHTs as well as support for public health facilities on both sides were other recommendations by the Liberian delegation. “We have already been doing this in Grand Cape Mount with great success and can do it here as well,” noted C-Paul Yanzi, CHT Lead for Nimba.

The Nimba County Inspector is honored by the Guinean delegation and dressed in traditional clothing and a show of goodwill.
Guinean and Liberian officials agreed that three general recommendations will be critical for success in this final period of the epidemic: 1) Reinforcing the community approach to prevention, surveillance and education on Ebola; 2) Holding regular cross-border meetings with health, political and security officials as well as traditional leaders and NGOs and; 3) Continuing work to dismantle false rumors and misconceptions about the virus. “There were many rumors at the onset of the outbreak. Had the County not stepped in to dispel them, we would still be in the middle of the outbreak,” noted Dr. Esther Muwanduza from WHO.
While this meeting did not touch on many of the technical details or action plans to enhance border monitoring and surveillance, it shows that both countries are willing to talk seriously and engage in productive dialogue about the issue. The meeting ended on an encouraging note.
“We must continue to focus on how to end Ebola together and how we can live together after Ebola. There will be many more meetings between our countries,” said the Governor N’zerekore.