“Hand in Hand for a More Beautiful Ramtha” 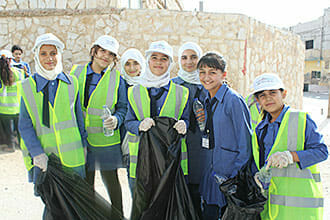 “Hand in Hand for a More Beautiful Ramtha”
The recent influx of Syrian refugees has placed a significant strain on the Municipality of Ramtha and its ability to provide trash collection services to its community members. To reduce tensions created by poor trash collection, the Municipality of Ramtha worked with the Hay Jalama and Dabet Nimer community enhancement teams (CETs) to secure support from the USAID Community Engagement Program (USAID CEP) for the rental of garbage collection services over a critical three-month period.
In support of municipal efforts, the CETs organized the “Hand in Hand for a More Beautiful Ramtha” clean-up campaign. Through the tireless efforts of CET members, nine schools and over 500 students and teachers alone were mobilized to participate in a three hour long clean-up effort. CET members supervised the campaign and offered encouragement and refreshments along the way. The municipality contributed to the campaign as well. Around 25 sanitation workers worked side by the side with community members, picking up trash and painting curbs. The campaign ended with a community celebration and the traditional Ramtha Dabkeh dance. As a result of CET efforts, approximately $15,000 in matching contribution was secured from the community, schools and the municipality.
The impact of the campaign was felt beyond the event itself. CET members believe these tangible results will influence lasting behavior change.
“When I was walking in Dabet Nimer few days after the clean-up campaign, I was surprised by the cleanliness of one of the narrow streets that we did not include in the campaign. The street is so narrow, a garbage compactor cannot enter it,” said Sameera Zahrawi, Dabbet Nimer CET member. “However, when I asked one of the inhabitants why the street is so clean, she said that the young boys who live there were motivated by the clean-up campaign and felt embarrassed that USAID CEP is cleaning their streets, when that should be their responsibility!”