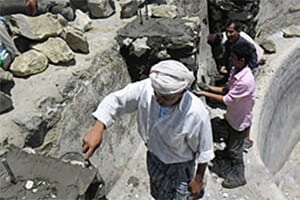 His Story: Ghaleb Alwan from Kusuma

Ghaleb Alwan attends the WASH and nutrition training.
My name is Ghaleb Alwan. I live with my father, my wife and seven children in Kusuma, a district in the Rayma Governorate in Yemen. Rayma is situated on high mountains, offering stunning views and hosting tropical vegetation and wildlife. But most villages are isolated and difficult to reach, which makes living there quite challenging.
During my childhood I couldn’t enroll  in school because I’m the only boy in my family, so I had to go with my father to the farm in order to help him. After I had my first child I moved to Sanaa looking for a better chance. I worked different works in Sanaa but because of security problems I returned to my village. I wished I went to school or learned any skill that helps me to support my family. We don’t own land, so I returned to work as a farmer for others, earning a very small amount of money. I worked during cultivating season only, but the rest of the year, people helped us.
When Global Communities came to our village in 2014, we learned during a community meeting about the Yemen Food for Asset Development (YFAD) funded by USAID through the Emergency Food Security Program. YFAD was created to help poor households develop new skills in order to improve their economic situation. My family was one of the targeted households suggested by the Community Volunteers Committee (CVC). I learned that I would train as a building worker to participate in WASH (Water and Health Sanitation) projects. I was happy and excited to start the training, since I would learn new skills and not be worried about my family, as the project would support us for four months with food baskets.

Ghaleb Alwan working on a WASH project in Kusuma.
I was the first person arrive to the training. I always sat next to the trainer; I watched carefully and tried to do exactly like him in everything. My goal was to learn as much as I could to be a skilled builder. With the continuous practicing during the WASH projects in the village, I was able to achieve the equivalent of two days’ work in one day with good quality.
All the people in my village and the trainer said that I’m one of the best workers in the area now. People are starting to ask me to do different building works for them. Instead of earning about USD12 a day, my situation improved along with my quality of work; now I earn about USD25 for one day’s work.
I would like to say thanks to those who gave me this opportunity, representatives of the CVC members and ‎the project officer, who gave us great attention and continuously followed up with us.