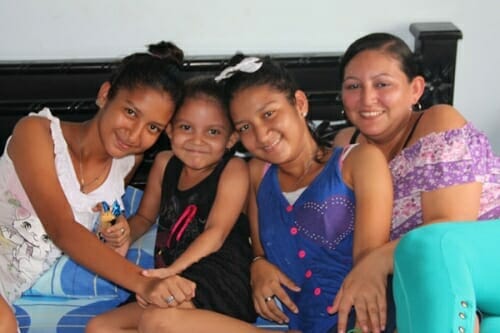 International Women’s Day 2015
International Women’s Day, marked on March 8th each year, is a global day to celebrate the achievements of women worldwide.
On this day, Global Communities is proud to salute and honor the millions of women around the world striving each day to improve the social, economic, and environmental conditions of their families and their communities.
Meet a few of them below.

Annamma – Bangalore, India
From the time she was a small child, Annamma would work with her illiterate parents and four siblings, picking and sorting trash to sell to recyclers.  The family lived on the streets, spending rainy nights under makeshift tents and scorching hot days searching for scrap to sell.

As an adult, she worked long, hot, grimy hours alongside her husband Ramesh to pick and recycle garbage, providing as best they could for their three young daughters. They were harassed by the police, looked on as thieves for “stealing” other people’s garbage that had been discarded on the streets and in the dumps.
Annamma’s life began to change with the Global Communities’ Trash to Treasure project which launched in 2009 to create a trash collection system in Bangalore. Today, Annamma no longer picks up the garbage.  Instead, she is the manager of a dry waste collection center where workers sort trash and separate paper, plastic and glass to sell to scrap dealers and specialized recyclers.
For Annamma, who once thought she was nothing and would never be anything, the transformation is a miracle. She used to be harassed by the police and was looked down on by people she passed in the street – if they noticed her at all. Now she manages a team of people, and the city comes to her for advice on how to manage the trash problem.

Martha – Monteria, Colombia
Martha is originally from San Rafael, a municipality located southeast of Antioquia, a region in Colombia whose fortune once depended on the exploitation of gold. Eventually, though, violence and criminals led to the displacement of many residents, including Martha.

Fleeing the violence, Martha arrived seven years ago in Monteria, 275 miles and 11 hours away from her home in San Rafael. She thought she had found a safer life for her and her family, but the violence and injustice that affected thousands of Colombians in the early 2000s once again found its way to her doorstep. Her husband was killed, leaving her the sole provider for her three young daughters.
Left with few options, Martha worked two to three jobs a day to feed her children and pay for their education. Martha lived day by day, holding on to her dreams and coping by saying, “When something bad is happening, there is always tomorrow to make it better.”
Tomorrow finally came one morning in 2013. She was invited to participate in Global Communities’ ANDA’s income generation and entrepreneurship project, which helps individuals like Martha understand their life difficulties, formulate a life plan and develop entrepreneurial skills. With ANDA’s training and coaching, Martha was able to create her own home-based linen store called Maty’s Creations. In addition to earning a profit, the mission of Maty’s is to engage and empower people who have an interest in making a difference and advancing their dreams.
Martha knows that capital is important for business momentum. She also knows, however, that positivity and confidence are what will make her business thrive. As this woman, who has endured so much, said, “Those who don’t believe in themselves will never achieve the dreams that they set out to accomplish.”

Catherine – Ndera, Rwanda
Like so many survivors of the 1994 Rwandan genocide, Catherine suffered unspeakable tragedies. But as survivor, Catherine resolved to keep a positive outlook on live and turn her bad experiences into something useful. She decided to dedicate her life to helping traumatized members of her community.

Despite all her good intentions, Catherine knew she could not do much without training in counselling and handling trauma cases so she was very interested when Global Communities launched a program to train Community Psychosocial Workers (CPW). CPWs are volunteer counselors who provide individual, group and family counseling and sensitize people on topics like grief, mourning, sexually-based gender violence and trauma. Catherine enrolled in the program and after finishing her training, immediately began working in her community.
Now, Catherine’s goal is to help those she counsels improve their communication and coping skills; reduce the impact of stressful events and situations; and improve their quality of life. She has also developed the skills and confidence to help resolve conflicts and unite broken families and is viewed as a respected leader within her community.

Aida – Keteramaya, Lebanon
Aida fled Damascus with her husband and children when the fighting in Syria became too intense. Leaving behind their home and all that they knew, they settled in the Lebanese town of Keteramaya and began the slow process of putting their life back together.

The first step was to find somewhere to call home. Refugee camps are illegal in Lebanon so Syrians rely on apartments, community centers, and Lebanese families for places to live. The steady influx of refugees over the past four years means that all three options – even dilapidated shelters without heat or running water – are in high demand. Aida and her family eventually settled in a home that did not have a working bathroom or proper doors and windows. It cost around $300 a month.
In 2013, Aida’s family was referred to Global Communities’ Shelter Assistance to Refugees Program. Through this program, Global Communities makes the necessary repairs to homes and apartments if the landlord agrees to let a refugee family live in the home rent-free for one year. In Aida’s case, this led to an extension, repairs to the bathroom and kitchen plumbing, and the installation of doors and windows. When asked what her housing was like before, she commented, “We had no bathroom for one year. It was terrible. We suffered.”
“Before we had no privacy, no space. We could not afford both rent and food. Now we can live in a more decent way. This has helped us in so many ways.”