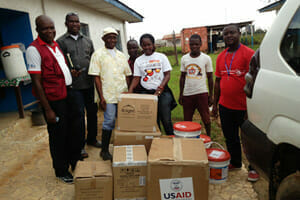 A burial team from Bong County supported by ALERT.
The “Assisting Liberians with Education to Reduce Transmission (ALERT)” project, funded by the US Office of Foreign Disaster Assistance (OFDA), is bring about positive change in Ebola affected areas.
The ALERT project which is ongoing in Bong, Lofa and Nimba Counties is been implemented by an American NGO, Global Communities (formerly CHF International) in partnership with the Liberian Government. The project’s main focus is reducing transmission of diseases through educating locals about preventing the spread of the Ebola virus and strengthening the capacity of County Health Teams to deal with burials and infection control.
Meetings have been held throughout Voinjama and Kolahun (in Lofa), and have started in Bong and Nimba Counties. The project is also providing support to the burial teams in Lofa, Bong, Nimba, and Margibi, but is scaling up to assist burial teams across Liberia.
“Our intervention under the ALERT project assists Liberians to be educated and empowered to work proactively in their communities and with the county health teams to control the disease. County MIA, MOHSW, and traditional leaders take key roles in all our meetings at county, district and community levels. The Director of Community Health Services, Tamba Boima, has also been involved from the start of these meetings. They were initiated as a response to the denial of Ebola in July and August, in Voinjama,” Global Communities Country Director, Piet deVries said.

The Global Communities ALERT team delivering safe burial supplies in Grand Bassa.
Mr. deVries noted that the county health team has received great support from communities following the meetings and are now very active in taking actions to control the disease. People are practicing good hygiene, illness is report quickly, and there is good cooperation with the burial teams.
Providing additional key information about the intervention of the project in Lofa County, Global Communities the Deputy Chief of Party, Leroy Johnson, explained that the project has assisted communities in the county with awareness on the Ebola virus. Mr. Johnson disclosed that the ALERT project, supervise by his organization, has provided training and compensation to the county’s burial team.
He noted that his entity will ensure that necessary hygienic items such as chlorine and personal protective equipment are provided the health teams to strengthen their capacity. As part of the project, a community level meeting was recently held in Zuvasu Town, Kolahun District where residents were educated about the danger about the Ebola Virus. The citizen level meeting was facilitated by the Liberian government through the Ministry of Health and Social Welfare by Tamba Boimah, Director of Community Health.
Mr. Boimah asserted that the interaction with residents is yielding positive results in the fight to contain the dreadful Ebola virus. He said many of the residents are now receiving the basic information about the way in which the virus can be spread and prevented. Mr. Boimah explained during the community level meeting a film on Ebola is view by residents after which they are asked about the views through a brake up session for discussion.
“After the viewing of the film citizens are asked to provide means through which the Ebola virus can be stopped”, Mr. Fallah narrated. According to him, this interactive method is gaining more momentum as locals are now shifting their thoughts about the Ebola virus and realizing that they can help stop the spread of the disease.
Speaking on behalf of beneficiaries in Zuvasu Town, the town chief and sectional chiefs thanked the US government supported ALERT project for the knowledge they have gained through the project.

Residents in community meeting with Global Communities staff and Ministry of Health officials.
They assured Government and partner, Global Communities, that everything that had been learned would be practiced to the fullest.
Also speaking to the WASH Media, the Head of Lofa County burial team said the intervention of Global Communities has contributed immensely to efforts of Government and partners to combat Ebola.
Mr. Blimah Sirleaf noted that Ebola related deaths rate is on a decrease and as such it is a clear indication that the prevention message going across to the people of the county. He commended Global Communities for compensating the county’s health team with stipend. Mr. Sirleaf used the occasion to appeal for continued support to assist them to combat this awful virus.
Global Communities is an international non-profit organization that works closely with communities worldwide to bring about sustainable changes that improve the lives and livelihoods of the vulnerable. Their belief is “Development is not something we do for people; it is something we do with them.”