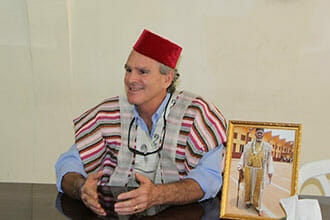 Liberian Traditional Leaders Honor Global Communities’ Country Director
By Stephen Farshing, Global Communities
MONROVIA, LIBERIA – In Pieter deVries’ last days as Country Director for Liberia, members of the Traditional Council paid a memorable visit to Global Communities’ Monrovia office. Chairlady Fetta Saah (Lofa), Chief Momo Kaizoulu (Grand Cape Mount), Chief Samuel Tweh (Nimba) and Elder Boakai Zoulu (Bomi) met with deVries to express their gratitude to him for Global Communities’ critical role in Liberia’s Ebola response.
Prior to engaging traditional leaders, Global Communities faced immense challenges related to its safe and dignified burial activities. Many communities, especially in the southeast, did not trust burial teams. “They were afraid and did not understand that we were there to help,” commented deVries. “Some even thought that our disinfection sprayers were actually spraying Ebola.”
Last September, a community cornered a burial team trainer in a house in Rivercess and stoned them while another community in Grand Kru stole a burial team’s vehicles and forced them to walk out of the village. “That was when we decided to engage the Traditional Council to help us communicate our message because we were not getting through with the County Health Team alone,” said deVries
With the help of the traditional leadership, communities were able to understand that Global Communities was doing the right thing and trying to save lives. They mobilized other traditional and religious leaders to teach people that Ebola was spreading through traditional burial practices.
“The Traditional Council really strengthened our ability to reach communities where we had no relationships or credibility established,” said deVries. “We owe a lot of success to them.”
As a sign of honor, Chairlady Saah presented deVries with a traditional Chief’s gown and hat. “On behalf of the women, the youth and all the traditional leaders of Liberia we present you with our traditional cloth,” she said. “When you wear this, no matter where you are, we will always be with you. We are eternally thankful to you and Global Communities for the work you have done. We are proud to say that you are now and forever a Chief. You will be greatly missed but we will always remember your service to our country.”
In addition, the leaders gave deVries the honorary Chief name “Zanzan Kawah,” the name of the head of Liberia’s Traditional Council.
Clearly moved by this gesture, deVries responded: “Through working with you and the traditional leaders, I learned about the real Liberia. Before working with you, I had been in Liberia for more than a year but did not truly know this country and its people. Now, because of our collaboration, I have learned more than I could have imagined. I will always be grateful and humbled by the way you work with your people. Thank you for teaching me that.”
Though deVries’ tenure as Country Director has come to an end, he is now returning to Global Communities’ HQ in Silver Spring to serve as the Senior WASH Technical Advisor where he will remain significantly engaged in all of Liberia’s program activities.