Municipality of Ramtha: Working Hand in Hand with Communities 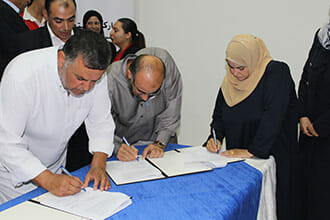 Municipality of Ramtha: Working Hand in Hand with Communities

CET Members sign the partnership agreement with the Ramtha Municipality and USAID CEP to improve the cleanliness of Ramtha.
The recent influx of Syrian refugees has placed a significant strain on the Municipality of Ramtha and its ability to provide waste management services to the community. While the population of Ramtha increased from 80,000 to over 200,000 and daily trash collection increased from 60 to 120 tons, allocation of resources to municipal services did not increase. The accumulation of trash in the streets and associated increased health risks contributed to tensions between the different segments of the population and the municipality. Unable to meet the needs of its citizens, the municipality became a target of frequent protests and overall displeasure.
To reduce rising tensions, the Municipality of Ramtha worked with the Hay Jalama and Dabet Nimer Community Enhancement Teams (CETs) to propose renting garbage collection services for a three-month period to the USAID Community Engagement Program (USAID CEP).
Using a facilitative approach designed to increase local ownership, USAID CEP collaborated closely with the Municipality and CETs to prepare the specifications for the procurement, determine trash collection routes, and conduct the bid evaluation. In addition, the municipality and CETs drafted an MOU defining their partnership and collaboration during implementation which included, among others, daily monitoring of service provision quality of service provision.
To commemorate the partnership, the Municipality organized a public signing of the MOU, recognizing the work of the CETs in the process. “USAID CEP has managed to bridge the gap between local communities and the government. I am proud to be part of this project,” said Ala’ Tanash, a CET member from Dabet Nimer. “I believe that this project has changed the way the municipality thinks and plans. Now the mayor knows he has community representatives that he should consult with to consider community needs in the municipality’s plans.”
Very quickly, community members started noticing a significant improvement in their neighborhoods.
“Ramtha is now 70% cleaner than before because of the rental of garbage compactors and twice daily collection supported through USAID CEP,” reports Ibrahim Al Saqqar, the Mayor of Ramtha. “This unique partnership between the Municipality of Ramtha and community members of Hay Jalama and Dabet Nimer, represented by the CET members, was utterly dedicated to relieving the stressors faced by the Ramtha community in respect to basic service provision like waste management and improvement of infrastructure.”