Neighborhood Revitalization and New Life for Residents of Legrand II 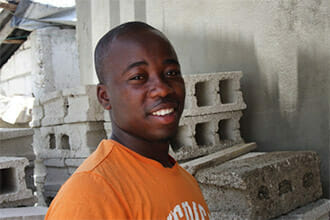 “Before the project, access to the corridor was very difficult…Now everything has changed.”                                   – Thierry Tresilien, resident of Legrand II
Like most slums of Port-au-Prince, Legrand II’s overpopulation stems from the mass exodus from impoverished rural areas of thousands of people in search of a better life after their neighborhoods were destroyed in the 2010 earthquake.
With funds from the American Red Cross through the LAMIKA program, Global Communities Haiti has been working for nearly three months in Legrand II to improve access to basic services, landscape community spaces, strengthen houses and rehabilitate roads and pedestrian corridors.
Thierry Tresilien was born in the neighborhood. His house was rehabilitated by Build Change, another project partner. He explains how the project has brought an economic boost to the neighborhood and contributed greatly to the development of the area.
“Before the project, access to the corridor was very difficult. It was painful to move about even with a wheelbarrow. Now everything has changed,” he says. “With the new corridor, people can easily evacuate in case of disease.” He adds that the work has helped to strengthen the capacity of people in the area. Today his dream is to see the rehabilitation of other nearby roads.
Another resident in this neighborhood, Efort ostin Fils, is landlord of two nearby properties. Nearly 20 people live in his apartments that have been repaired by Build Change. He says the results of the project are extraordinary and have included the involvement of the whole community. “Now a wind of change blows in the community with this accessible corridor, houses repaired and installation of street lights,” he says.