Peter L. Woicke Named to Global Communities Board of Trustees 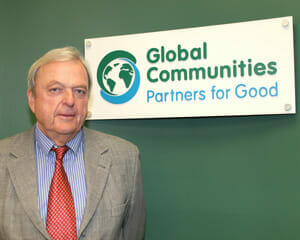 Peter L. Woicke Named to Global Communities Board of Trustees

Silver Spring, Maryland – Global Communities today announced the appointment of Peter L. Woicke, former CEO of the International Finance Corporation and Managing Director of the World Bank, to its Board of Trustees.
“We are so pleased to welcome Mr. Woicke to the Board of Global Communities,” said Robert A. Mosbacher, Jr., Chairman of the Global Communities Board of Trustees. “His vast financial expertise, international management experience and development background will be an enormous asset to our work with underserved communities.”
Mr. Woicke has experience in investment banking and operational and strategic leadership of business in Europe, Asia, Latin America and the USA. He served as CEO of the International Finance Corporation and Managing Director of the World Bank from 1999 to 2005 where he focused on its expansion, particularly in frontier countries and high-impact sectors, such as domestic financial markets, infrastructure, information technology, health and education, and small and medium enterprises.
Before joining IFC, Mr. Woicke held numerous positions and worked for nearly 30 years with J.P. Morgan, serving as Chairman, Managing Director and Chief Executive of J.P. Morgan Securities Asia. He also served as Executive Manager of JP Morgan & Company Inc., and as a member of J.P. Morgan’s executive management group. There he had a diverse range of responsibilities, ranging from heading the banking division of a Morgan affiliate in Beirut to leading Morgan’s global oil and gas group.
Mr. Woicke serves on the Board of Trustees, Ashesi University Accra, Ghana; the International Youth Foundation; and the Saudi Aramco board. He served as Chair of the Save the Children International Alliance board from 2008-09. Former appointments also include as a Non-Executive Director of Anglo American PLC from January 2006 to April 2013; as Independent Non-Executive Director of MTN Group Ltd from June 2006 to March 2008; and as a Member of Supervisory Board of Raiffeisen International Bank-Holding AG from January 2005 to December 2007.
“Global Communities is delighted to welcome Peter to our board where his expansive knowledge and commitment will advance our work with the world’s most vulnerable communities,” said David A. Weiss, President and CEO of Global Communities. “His tenure on the board will greatly benefit our partners around the globe, building on the significant projects Global Communities has led around the world since 1952. He is most a welcome addition to our team.”
ABOUT GLOBAL COMMUNITIES (FORMERLY CHF INTERNATIONAL)
Global Communities is an international non-profit organization founded in 1952 that works closely with communities worldwide to bring about sustainable changes that improve the lives and livelihoods of the vulnerable. Global Communities believes that the people who understand their needs best are the people of the community itself. Learn more at www.globalcommunities.org