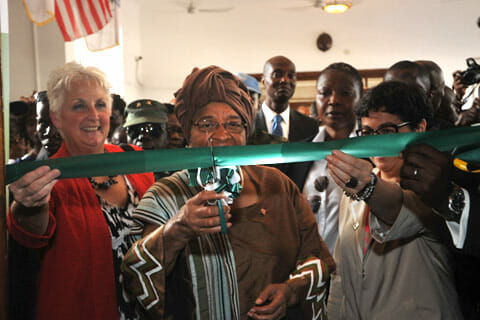 President Sirleaf cuts the ribbon officially opening the Trade Fair at the Monrovia City Hall.
MONROVIA, LIBERIA –  President Ellen Johnson Sirleaf has formally launched the Liberia National Trade Policy 2014-2019 and the Liberia National Export Strategy 2014-2019 which outlines government’s strategy for creating inclusive growth through trade competitiveness.
The Trade Policy is government’s overarching strategy for steering the country towards regional integration into ECOWAS and multilateral integration into the World Trade Organization. “Let me say we have a very strong commitment to government’s accessing the World Trade Organization because it has multiple benefits and open markets create new opportunities not only domestically but regionally and internationally,” President Sirleaf said.
According to an Executive Mansion release, the Liberian leader made the statement at the formal opening of the Second Micro, Small and Medium Enterprises (MSME) Conference and Trade Fair at the Monrovia City Hall on Tuesday, April 29. The conference is being held under the theme: “From Vision to Implementation – Buying Liberian, Building Liberia.”
President Sirleaf emphasized that to support these businesses, the National Export Strategy will provide support to six key sectors where the best opportunities exists to generate export diversification. She named rice, oil palm, rubber, cocoa, cassava, and fisheries. “Through implementing this strategy, we expect to create a vibrant and diversified export basket and open new markets and opportunities for business owners,” the Liberian leader said.
The Liberian leader emphasized that the success of MSMEs is fundamental to the future of the country’s economy. She noted that though the number of formal SMEs remains small, it continues to grow each year. Currently Liberia has over 10,000 formally registered businesses.
President Sirleaf also announced the National Small Business Empowerment Act and the Bureau of Small Business pointing out that this new Act will legally ensure implementation of the commitment made when she delivered her Annual Message in January that small Liberian-owned, including Liberian women-owned businesses are granted 25 percent of the government’s public procurement opportunities, and that the Ministry of Commerce and Industry is equipped with a services center to help businesses to qualify to access these markets. “This time, it’s a law. It’s one thing to have a policy. It’s one thing to have a strategy; but if you don’t make it enforceable, it becomes mere words. So, this time it’s a law,” the Liberian leader stressed.
The Liberian President also disclosed that the first project under the Liberia Innovation Fund for Entrepreneurs (LIFE) where Government through the Liberia Bank for Investment (LBDI) in collaboration with the Government of Japan have provided funds to construct a modern weaving facility to be known as the Lofa Women’s Weaving Center in Voinjama, Lofa County. They will be able to weave their cotton into high-quality Liberian country cloth for the local and international market.

President Sirleaf visits different stalls at the Trade Fair.
She indicated that an entrepreneur will shortly open a Made in Liberia Trade Store, called the Liberian Marketplace, on Tubman Boulevard, near the Bella Casa Hotel; while at the same time, giving local producers access to world markets through the website Liberian Marketplace.com. She noted that this store is expected to serve as a permanent location for local businesses to market their products to shoppers in Monrovia. “We hope that this new store can serve as a demonstration of Liberian capabilities so that it will encourage the development of other locally sourced high-quality retail products,” President Sirleaf reiterated.
The Liberian leader used the opportunity to challenge all Liberian Micro Small Medium Enterprises to think big, plan extensively, work hard, be realistic in their goals, improve their products, find new customers, and grow their market. “To make that business grow, it needs to be nurtured with new investment, strengthened with new staff properly trained, and adapted to new ideas,” she warned adding more importantly, “it requires you to commit your time, dedication, hard work and honesty. Through this combination, you can grow your business to generate profit, create jobs and incomes not only for yourselves but for others.”
Making remarks earlier, the Executive Director of the International Trade Center (ITC), Ms. Arancha Gonzalez said MSMEs is at the heart of the Liberian economy and by supporting these small entrepreneurs the country prospers. She said at the ITC, key to assisting Liberia’s MSMEs, is the need to unlock productivity, marketability, competitiveness, value-addition to ensure that they become the engines for job creation in the country and they are able to move their operations beyond the confines of their towns and cities in which they operate.
She stressed that to make that happen, there had to be the launch of a National Trade Policy and a National Export Strategy. “These are not just bureaucratic documents; they are a compass to achieve greater competitiveness starting with priority areas where Liberian companies, enterprises, entrepreneurs have a comparative advantage on which they have to build,” she said, adding that this is not the end but a start from somewhere. Two other sectors they are contemplating on including are the tourism and furniture sectors which hold huge potentials for MSMEs in Liberia.
Also, the Resident Representative of the International Finance Corporation, Mr. Frank Ajilore said his organization continues to increase its investment in the key priority areas which includes agriculture, mining, financial services, and infrastructural development.
He disclosed that recently the Board approved a five-year SMEs ventures plan for Liberia which will include support for the West African Ventures Fund which is fund they invested in three years ago focusing on Liberia and Sierra Leone. In Liberia, the fund has invested in 13 enterprises and will continue to evaluate such opportunities and increase its portfolio.
Also making remarks, the United States Ambassador to Liberia, Debora Malac said a favourable business climate encourages the growth of MSMEs and promotes the commercialization of food value chains. “Agro-input suppliers, equipment manufacturers, processors, traders, commercial farms, transporters, warehouse and cold chain operators and other service providers are critical players that help value chain function,” she stressed, adding that these players can only thrive if government policies and regulations encourage, and do not hinder business.
Ambassador Malac promised to work to increase the number of MSMEs in Liberia by encouraging donors, government, and the private sector to develop innovative solutions to enhance the business environment. “This includes finding ways to channel credit to provide quality inputs and equipment to smallholder farmers through private enterprise, creating opportunities to attract youth to new employment and business opportunities in agriculture as well as seek ways to make markers function better through improving the flow of information,” she promised.
The two-day conference focuses on enterprise-development promotion, inclusive economic growth and empowerment of Liberia’s MSMEs, and brings together 500 participants from Liberia’s MSMEs, banks, microfinance institutions and multination corporations.
The Conference also provides an opportunity for participants to explore ways to break down national and international obstacles to inclusive economic growth and empowerment of Liberians. This year’s theme is the Agribusiness Experience in Liberia, with a focus on cotton, rice and cassava. The Trade Fair showcases MSMEs successfully meeting market demands despite the trade obstacles that they face.
As part of the event, experts from Liberia, ECOWAS and other regions are exploring practical steps that financial institutions, concessionaires, MSMEs and the government can take to accelerate profitability, sustainable and inclusive economic growth for Liberian MSMEs.
The conference is being held in partnership with the International Finance Corporation-World Bank Group, United States Agency for International Development (USAID-Liberia), Government of Japan, Building Markets, The MarketPlace, BSC Monrovia, Liberia/IBEX (Volunteers for Economic Growth Alliance), Global Communities – Partners for Good, World Intellectual Property Organization, ITC, among others.