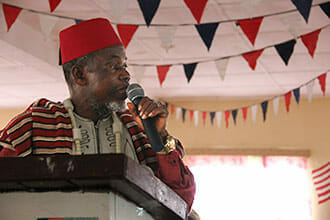 Natural Leaders gather outside the Voinjama city hall prior to the launch of Global Communities’ Special Traditional and Cultural Engagement initiative on Jan. 19. Natural Leaders are community members who helped their villages become open defecation free (ODF) as part of Global Communities’ USAID-funded Improved Water, Sanitation and Hygiene (IWASH) program prior to the Ebola outbreak. Open defecation free IWASH communities reported no cases of Ebola, even in some of the hardest-hit counties.
Voinjama, Liberia – As Liberia continues to make gains in the fight against Ebola, Global Communities is partnering with traditional leaders to hunt down remaining infection threats in one of the most secretive institutions in the country.
“Bush schools” teach behaviors and rituals that prepare youth for adulthood within traditional Liberian society. On Jan. 19, Global Communities launched a national Special Traditional and Cultural Engagement initiative to encourage traditional leaders at bush schools to engage in Ebola prevention.
“The goal is to stop traditional practices at these schools for now, because some practices support Ebola transmission,” said Global Communities Country Director Pieter deVries.
Reuters reports that each year, thousands of youth leave home to attend bush schools – forest camps run by zoes (spiritual leaders) where they are initiated into secret societies called poros for boys and sandes for girls.

Traditional leaders gather with Global Communities Country Director Pieter deVries in a formal welcome, which included the passing of a chicken and sharing of kola nuts.
Health messaging has permeated much of the country, but WHO officials remain concerned that the last cases of Ebola infection and transmission will be the most difficult to reach. Practices in bush schools are not often discussed, but are said to include male and female circumcision as a means of initiation and other activities that could promote Ebola transmission. Potential Ebola cases would likely remain unknown to health officials due to the secretive nature of the rituals. To reach bush schools, it is necessary to engage traditional leadership.
The Special Traditional and Cultural Engagement initiative, a component of Global Communities’ ongoing USAID-funded Assisting Liberians with Education to Reduce Transmission (ALERT) program, will help chiefs travel to and meet with bush school leaders to encourage them to halt practices while Ebola remains a threat.
Since the beginning of the outbreak, Global Communities has worked closely with traditional leaders to spread preventative health messaging. “These leaders play a leading role in community meetings and dialogue sessions, particularly in remote communities and those with high levels of Ebola denial,” said Global Communities Environmental Health Advisor George Woryonwon.