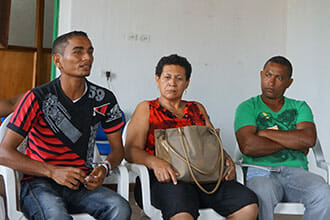 “We used to be known for our fear; now we are known for our creativity…Now we can talk where before we could not.”
For decades, Colombia’s rural communities have lived in the traumatic shadow of drug trafficking and guerilla and paramilitary violence. Millions were forced from their homes. Thousands were intimidated, tortured or massacred. Communities turned on each other, as no one could be sure who was persecutor and who was friend.
Alfonso was born into this environment of fear, in the rural village of Pijiguay.  After 16 community leaders were massacred in 1997, Pijiguay was all but abandoned. Those who stayed behind remained quiet about the murders, doubting that they could trust the government to protect them and terrified of retaliations if they did speak up. They also didn’t trust outsiders, since a common tactic of illegal groups was to call a community meeting then kill the leaders who showed up.
In 2010 when Alfonso was 14, life in Pijiguay changed for the better when Global Communities’ Colombia Responde staff arrived in the village. At first, the villagers were afraid, certain that this was another trick to lure them to their deaths. But Alfonso heard something different in what the Global Communities team was saying, and for the first time in his young life, he trusted the outsiders. He went door to door to bring his neighbors to the community school. It was in this first meeting that the residents of Pijiguay started to reclaim their village.
First, Colombia Responde provided counseling to the residents to help them overcome years of trauma. Then, Colombia Responde helped the villagers form a community development committee to prioritize and address their needs. Alfonso joined the committee and soon realized that this was about more than the road that the committee built – this was about finding their voices. Through trainings that helped residents learn about their rights and how to access support from their government, the committee members developed confidence. Now, Alfonso helps lead the community radio station, giving residents a venue for sharing the day-to-day information they need to run their lives, but also for discussing social and economic issues, sharing stories and experiences, and celebrating their culture and traditions. Pijiquay is once again active and thriving.
“We used to be known for our fear; now we are known for our creativity,” Alfonso says. “Now we can talk where before we could not.”
Read more stories about refugee families and diplaced communities as they rebuild their lives.