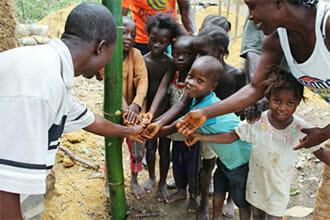 Study: Ebola Infections 17 Times Less Likely in Communities that Participated in Community-Led Total Sanitation
Press release originally published on Reuters Alertnet
100% of 284 Open Defecation-Free Liberian communities reported they were Ebola-free
Research evidence points to a strong correlation between Community-Led Total Sanitation and Open Defecation-Free status and reduced risk of Ebola
Silver Spring, MD – August 13, 2015 – Global Communities today released results of a study to examine whether communities in Liberia stood a better chance of resisting Ebola during the outbreak of the past 18 months if they participated in efforts to achieve Open Defecation Free (ODF) status. The study confirmed that a representative sample drawn from 284 Liberian communities that achieved ODF status by participating in the Community-Led Total Sanitation (CLTS) process were Ebola-free despite their proximity to Ebola hotspots. Communities that began but did not complete the CLTS process also experienced significant protection and were 17 times less likely to experience Ebola Virus Disease infections.
Global Communities, supported by USAID, was already implementing CLTS through the Improved Water, Sanitation and Hygiene (IWASH) program before Ebola broke out in West Africa last year. CLTS triggers community disgust at open defecation practices and raises awareness of the dangers of unsanitary practices to encourage sanitary habits such as latrine usage and hand washing. Since 2010, Global Communities’ partnership with USAID and Liberia’s County Health Teams has coordinated Liberia’s CLTS program, including helping formulate the government of Liberia’s national water, sanitation and hygiene strategy.
During the epidemic, Global Communities received reports that all 284 communities that had undergone the CLTS process through to completion were Ebola-free, despite being surrounded by Ebola hotspots. With the waning of the epidemic, Global Communities engaged health experts in monitoring and evaluation, Jean Meyer Capps, MPH and Haron Njiru, MPH, to examine the anecdotal evidence by:

Surveying and studying in detail 551 Lofa County households residing in 18 CLTS communities – 10 of which had verified ODF status – and 25 non-CLTS communities with comparable geographic location, population size and ethnic group.
Results showed that of the 551 households sampled, 272 (49%) had confirmed cases of Ebola. Of these, 36 (13%) were in a community that had started CLTS but did not reach ODF status. The remaining 236 households (87%) with confirmed cases were in communities that had not participated in CLTS at all. 100% of ODF communities were Ebola-free and all households in CLTS communities – even those that never became ODF – were 17 times less likely to have any cases of Ebola, compared with households in non-CLTS communities.
“The study findings suggest that communities that reached Open Defecation Free status remained Ebola-free by adopting hygiene and sanitation practices, as well as other Ebola response behaviors that result in healthy outcomes, and that relationships, such as the use of Natural Leaders, may have played a key role in reducing Ebola risk at the community level.” said Piet deVries, Senior Technical Specialist at Global Communities and Liberia Country Director at the time of the epidemic. “Even beginning the Community Led Total Sanitation process helped build significant resistance to the Ebola outbreak through behavior changes and demonstrated the power of community-based preventative health. CLTS and similar approaches can also help communities be resistant to a host of other diseases, from dysentery to diarrheal diseases, and are highly cost-effective, compared to clinical services, for example. We believe we have identified an important source of resistance to a deadly disease, while also recommending that further research be undertaken to determine which behaviors, practices and relationships specifically led to this result.”
Global Communities has been active in Liberia since 2004, implementing development programs focused on peacebuilding, community engagement, economic development, municipal services, youth reintegration, and water and sanitation. Over the course of the epidemic, Global Communities supported nearly 60 burial teams throughout all 15 counties of Liberia to prevent the spread of Ebola, and conducted widespread community engagement with more than 15,000 community leaders across the country to educate communities about how to prevent and respond to Ebola. Today, Global Communities continues implementing CLTS in Liberia, as well as overseeing safe burials and border surveillance.
To learn more, please see the full research here.
To speak to a spokesperson in relation to the study call 301-587-4700 x1798 or email [email protected]
GLOBAL COMMUNITIES Global Communities is an international non-profit organization founded in 1952 that works closely with communities worldwide to bring about sustainable changes that improve the lives and livelihoods of the vulnerable. Global Communities believes that the people who understand their needs best are the people of the community itself. Learn more at www.globalcommunities.org
ABOUT CLTS in LIBERIA
Community-Led Total Sanitation (CLTS), an effective, affordable and adaptable approach to eliminate open defecation, promotes universal sanitation access while reducing community dependence on donor subsidy and fosters community buy-in and demand for safe sanitation and improved hygiene. In Liberia, the three key components to Global Communities’ CLTS approach are Natural Leader Networks, integration of the CLTS process into government and traditional leadership structures, and development of local technologies that are affordable and accessible for rural and peri-urban Liberian communities. Learn more about Global Communities’ work using CLTS here.