The Cost-effective Way to Protect against Future Ebola Outbreaks 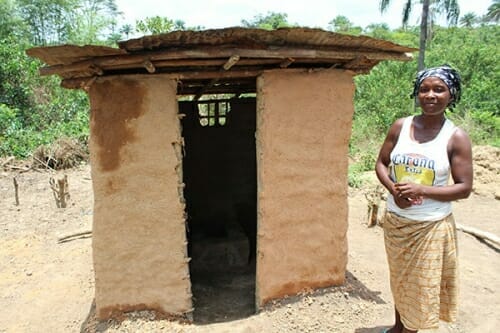 The Cost-effective Way to Protect against Future Ebola Outbreaks
By Piet deVries, Senior Advisor for Water, Sanitation and Hygiene, Global Communities
This blog post originally appeared in The Hill.

A community celebrates its verification as open defecation-free
Last week, we learned that after many months of infections, Sierra Leone is nearly Ebola-free. While the outbreak continues to infect people in Guinea, and Sierra Leone and Liberia remain at risk for a re-emergence, West Africa is a far cry from where it was last year, when there were hundreds of new cases identified every week, and officials were predicting a death toll that surpassed one million.
How did we get here, and avoid the worst case scenarios predicted by respected agencies like the UN and CDC? For many, the image that comes to mind is one of masked medical staff, struggling to save those infected with Ebola. And there can be no doubting the courage and dedication of the countless medical staff, from West Africa and around the world who risked so much to treat those in need. However, what if Ebola’s spread could be limited, its impact lessened, with behavioral changes and community buy-in?
Actually, such behavior change programs already exist and have recently proven to be effective during an infectious disease outbreak. Community-Led Total Sanitation was pioneered in Bangladesh in 2000, and over the past 15 years, it has proven to be a powerful method of rapid behavior change for improved sanitation and hygiene. Community-Led Total Sanitation reduces morbidity and mortality due to illnesses that spread through feces, urine, and poor sanitation and hygiene practices. What separates Community-Led Total Sanitation from other methods is its leveraging of social dynamics, such as social networks of trust, evoking powerful human reactions like disgust and pride, and social pressure to create behavior changes that help improve overall health.
My organization used Community-Led Total Sanitation as part of the USAID-funded Improved Water, Sanitation and Hygiene program, beginning in 2010 in Nimba, Lofa and Bong counties in Liberia. Partnering with the Liberian Ministry of Health, several key adaptations were made to adhere to local needs. These include creating a network of Natural Leaders, passionate volunteers who would help facilitate change by working inside their communities. These same volunteers would then utilize their own social networks to travel to nearby communities and help expand these healthier practices to new communities with the ultimate goal of being open defecation-free. By early 2014, Natural Leaders had brought 284 communities to open defecation free status and were working on more.
At the height of the Ebola outbreak, we received reports of an astonishing statistic: all 284 open defecation- free communities were reporting that they were also Ebola-free, despite being surrounded by Ebola hotspots. Was there a link between being open defecation free and Ebola-free? Or between the Community-Led Total Sanitation process and Ebola resistance?
Two independent public health consultants have just finished their research into the informal reports we had received, and their findings have been extraordinary. Focusing their research on 551 households in Lofa County, they established with a representative sample that the communities that had reached open defecation-free status were indeed Ebola-free. But they also found that communities that had even begun the Community-Led Total Sanitation process – but not reached full open defecation-free status – were 17 times less likely to experience a single case of Ebola. This suggests a statistically significant correlation between the Community-Led Total Sanitation work to become open defecation-free and in and being Ebola-free.
Of course, this is not to say that simply becoming open defecation free somehow stops Ebola. Rather, the findings suggest that those who had been exposed to Community-Led Total Sanitation education were far more likely to develop behaviors that lead to Ebola resistance, and that those who  were exposed to sanitation education – especially  when led by a member of their own community – were far more likely to adhere to  healthier behaviors and practices.
While the recent news of a vaccine for Ebola is certainly encouraging, strengthening health systems across Africa and other vulnerable countries is vital to prevent future outbreaks of Ebola. At the center of any strengthening effort should be Community-Led Total Sanitation – adapted to the local environment and culture to maximize effectiveness. Such prevention can not only defend against Ebola, it can help fight against the many water, insect-borne, and diarrheal diseases that claim so many lives in the developing world today.  It does so at an extraordinarily low cost: in Liberia, where a community was equipped with latrines, dish racks and hand-washing facilities, it cost as little as $130 in incentives to natural leaders to help them become open defecation free.
Ebola – like many other diseases – spreads at the community level. If we want to fight diseases like this, we need to focus on the community level as well.  By empowering those at risk to make wise decisions that prevent infections in the first place, just like we saw in Liberia, countless lives can be saved.