The Humanitarian Situation in Gaza 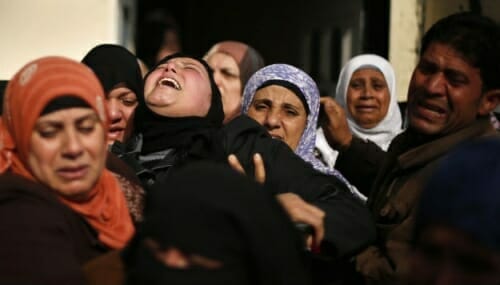 The Humanitarian Situation in Gaza
By Pia Wanek, Director of Humanitarian Assistance, Global Communities
This article originally appeared on the Middle East Institute.
Israel’s ground offensive against the Gaza Strip will make already dire humanitarian conditions for Palestinians there much worse.
Between July 7 and 16, Israel’s bombardment of Gaza killed 214 Palestinians (164 of whom were civilians) and injured 1,585 (including 435 children and 282 women). To date, 22,600 people have been displaced and are living in UN Relief and Works Agency (UNRWA) schools, because their homes have been destroyed or damaged or their neighborhoods are unsafe. Since the start of the emergency, 79 schools and 23 health care facilities in Gaza have sustained damage, at least 25,000 children are estimated to be in need of specialized psychosocial support, and 900,000 people are currently without water supply.1

Mourners at a funeral procession for a victim of an Israeli air strike.
These daunting numbers, from UN Office for the Coordination of Humanitarian Affairs (UN-OCHA), are a snapshot of the effects of the most recent escalation of open conflict. To fully understand the significance of these numbers, one must remember that these losses occur within a protracted humanitarian crisis that has intensified since Israel imposed an illegal blockade of the Gaza Strip in 2007. Since then, there have been three major escalations of hostilities:  in December 2008 to January 2009, in November 2012, and the current (and ongoing) crisis. From a humanitarian perspective, there is no return to “normal” in Gaza, even when ceasefires hold.
The Gaza Strip is one of the most densely populated places on earth: With 1.7 million people in an area only 10 kilometers wide by 40 kilometers long, it has a population density twice that of New York City. Unemployment and poverty rates are around 39 percent. Prior to the blockade, many of the non-refugee population were day laborers who worked in Israel, an option no longer available. Approximately 56 percent of the population are under age 18, and 43 percent are under 14. In other words, the majority of people in Gaza are, effectively, children.
Food security is a major concern in the Gaza Strip. Around 60 percent of the population is food insecure and about 50 percent of household income is spent on food. Israel bulldozed one-third of the arable land of the Gaza Strip in 2001 to create a buffer zone that runs the length of the Strip, which has led to an estimated reduction of 75,000 metric tons of produce each year. Fishing, a major industry that had employed 35,000 Gazans, was reduced drastically when Israel restricted fishermen to six nautical miles of the Mediterranean, the same water which receives 90 million liters of untreated or partially treated sewage each day.
My organization, Global Communities, works with the UN World Food Programme to provide food assistance to the most vulnerable populations in both the West Bank and Gaza, and a comparison of the two related territories demonstrates some of the key differences in the humanitarian pressures. In the West Bank, around 19 percent of the population is food insecure. In order to provide this population with much-needed nutrition, we developed an electronic voucher system. Vouchers are taken to predetermined stores and exchanged for locally sourced goods – eggs, milk, flour, vegetable oil, and other essentials. In addition to reducing hunger and malnutrition, this system helps also to stimulate the local economy. This has proven impossible in Gaza because reliable food production is insufficient. Basic food packages have to be procured and imported from outside the Strip.
The blockade of Gaza is the key cause of these humanitarian conditions. The blockade restricts movement of individuals and goods, especially food supplies, construction materials, fuel, and anything that might also have military use. It is worth noting that the blockade has not been maintained evenly throughout the seven years, with various periods of easing and tightening of restrictions, and smuggling tunnels have been used to import materials. However, a UN-OCHA study in 2011 undertaken after a temporary ease of the blockade concluded that people’s livelihoods had not significantly improved.
With each day the humanitarian crisis gets worse. But even when the current conflict ends, a return to the political status quo (the outcome of the previous two eruptions of violence) means that the humanitarian crisis will still persist. It has been estimated that by 2020, the population of Gaza will be 2.1 million and that by 2016, Gazans will run out of potable water. Unless there is a change in the political status quo, the humanitarian crisis in the Gaza Strip will continue to worsen even when the current conflict ends.
1. OCHA, “Occupied Palestinian Territory: Gaza Emergency Situation Report (as of 16 July 2014, 1500 hrs),” http://www.ochaopt.org/documents/ocha_opt_sitrep_17_07_2014.pdf