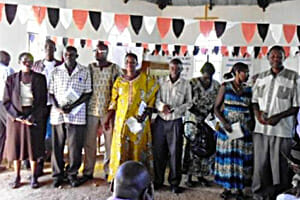 Farmers in Bushenyi, western Uganda, have been urged to join farming cooperative societies for social and economic transformation of their households.
By Bob Abaho
This story originally appeared on Chimreports.com.
The remarks were made by Chris Isibinsitabyo, the Design program field director of Global Communities’ Partners for Good under USAID while addressing over 200 farmers from the sub county of Kyeizooba, Bushenyi district during the launch of the Kyeizooba Twimukye cooperative at Bwera Church of Uganda. Mr. Isibinsitabyo urged farmers to embrace cooperative societies and share profits accruing from them saying that with farmers joining hands, it will support them to access ready and bigger markets for their produce and this will help them generate more income. “Successful cooperatives can benefit member farmers in marketing their farm products and accessing farm supplies, credit, and other services,” he added.
Isibinsitabyo added that farmers having Cooperative societies will raise the general price level for products marketed and lowering the cost of supplies  purchased and reducing per-unit handling costs. At the same event, the Bushenyi district Commercial officer David Byamukama advised the farmers to undertake improved farming methods with better planting materials that fetch much income from both local and international markets so as to get much income and eradicate poverty in their households. He also emphasised that government is committed to helping them with interest-free loans and grants to ensure prosperity for their cooperative society. Byamukama pointed out that members must chase a common goal of having their cooperative grow stronger saying it must start from the grassroot level. He also asked the new board members to give accountability to their members and warned them against corruption tendencies which led to the downfall of cooperatives in the early 1990s. Byamukama also pledged support to have the Kyeizooba Twimukye cooperative registered with the ministry so that it starts its activities as soon as possible.
After the launching of the society there was election of the board committee that saw Mrs. Jacinta Kamashengyero being elected as the Kyeizooba Twimukye cooperative chairperson. In his speech during the centenary cerebration of the Cooperative Movement in Uganda, President Museveni’s said there are 14060 registered societies in Uganda serving membership of about 4 million people and mainly involved in agricultural marketing and finance.  According to the Global Communities’ programs director, Richard Mujuni, the organization team is to partner with the cooperative, its members and none members interested in joining to develop and test new approaches to cooperative development which can be adopted and institutionalized to develop the local farmers whose growth is hindered by so many challenges.