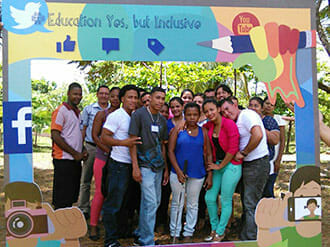 USAID Local Governance Program Launches Social Media Campaign for Inclusive Education in Nicaragua
The USAID Local Governance Program (LGP), together with eight partner organizations, launched a social media campaign (Pa Ti, Pa Mi, Educacion Si, pero Incluyente) urging for increased investment in inclusive education for vulnerable populations in the Southern Caribbean region. The central message of the campaign was that the coastal population has the right to inclusive, respectful quality education without distinction of sex, sexual orientation, disability or ethnicity. This campaign is innovative for two reasons – it was created thorough a participatory process which included all eight local organizations; from the selection of the topic to the definition of messages. Secondly, it is a low cost campaign which is aired exclusively on social media. The campaign was launched both Facebook, Twitter, and the LGP and partners’ web sites simultaneously by video streaming from Bluefields. Local television and radio coverage on the campaign has come from numerous sources including Noticiero El Meridiano,  Radionoticiero, Radio Zinica, Bluefields News, La Costeñísima and Telecaribe.
To learn more about the campaign, visit the PaTí, PaMí. ¡Educación Sí, Pero Incluyente Facebook page.