Working to Beat Ebola Along the Border 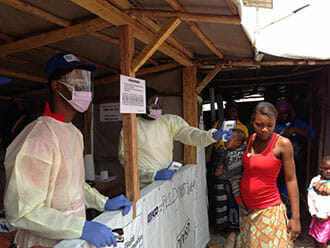 Working to Beat Ebola Along the Border
By Alice Urban, Global Communities
This story originallt appeared on the USAID IMPACT blog.
Liberia’s main border crossings officially opened February 22, bringing to an end six months of prohibited international foot and vehicle traffic put in place by the Ebola crisis. But the actual opening of the borders did not happen as one would have expected.
Border crossings like this one at Bo Waterside in Liberia were closed for six months due to the Ebola outbreak. Photo by Carol Han, USAID/OFDA
At Bo Waterside—a small town on the Liberia side of the Mano River which divides Liberia and Sierra Leone—people didn’t see or hear trucks and taxis sputtering legally across the border for the first time since August. Instead, sounds of hammering rang through the air.
It turned out that Sierra Leone had yet to declare its side of the border open. While immigration officials waited for the official word, an NGO called Global Communities—with support from USAID’s Office of U.S. Foreign Disaster Assistance—was hard at work building Ebola screening and triage stations to ensure travelers from both sides of the border would be effectively monitored for Ebola symptoms. Local officials approved of the new measures.
Migrant workers, farmers and fruit sellers like this boy use the borders every day to make a living. When the borders closed, businesses suffered. Photo by Carol Han, USAID/OFDA
“We expect an influx of people,” said Charles Brooks, a security commander at Bo Waterside. “It’s safer [this] way. We need to take preventative health measures and have a more secure border.”
Because merchants, farmers and migrant workers routinely cross borders to make their living, the prevention of cross-border Ebola transmission has become a priority for affected governments and communities, as well as for response organizations.

USAID supported Global Communities to beef up Ebola preparedness at the border by building screening and triage stations. Photo by Carol Han, USAID/OFDA
At the Bo Waterside border crossing, Global Communities is beefing up preparedness at border checkpoints with hand washing stations, a temperature screening booth, and holding rooms for suspected cases. The screening and triage stations also have a disinfection team on hand and an ambulance on call to transport potential Ebola patients. The triage and screening stations are being run by another USAID partner, the International Organization for Migration (IOM).
“Once we get to zero cases in Liberia, Sierra Leone or Guinea, borders will be the key to maintaining zero in the region,” said Doug Mercado, leader of USAID’s Ebola Disaster Assistance Response Team. “That’s why the work we are doing here is so critical.”
MEET THE TEAM: USAID also partnered with IOM to run the screening and triage stations along the Liberia-Sierra Leone border. Photo by Carol Han, USAID/OFDA
Global Communities is also working closely with traditional leaders and local health officials to track the movement of people using informal border crossings, especially in far-flung communities. In addition, the organization is trying to foster coordination and information sharing on multiple levels.
“We are not only partnering with Liberia’s immigration service to support official border crossing points, but we are also working at the community level to support surveillance and coordination where people cross informally,” said Global Communities Program Manager Michael Fogbawa.
TEST RUN: Hygienist Mustapha Wiles with IOM tests out a disinfectant sprayer on Global Communities Contact Tracing Coordinator Abbiseh Pitte in preparation for the border opening. Photo by Alice Urban, Global Communities
When the borders finally opened at Bo Waterside, Musa Kamera was pleased to see activity once again in the tiny town. With a shop a few hundred yards from the Mano River Bridge, she sells popcorn balls, pasta, rice and other snacks. The sound of the cars and trucks now crossing the bridge means more income for her and her family.
“Business has been bad with the border closed,” she said. “I am happy the border [is] open.”