Yehya and his Ambitious Journey 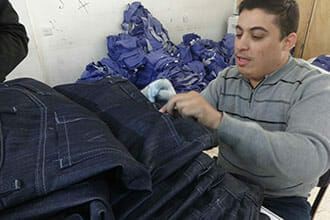 Yehya and his Ambitious Journey
To Yehya, 28, ambition is not just a word or a slogan one repeats meaninglessly. To him, ambition is the future – a combination of persistence and hard work, a privilege he had to fight for. Growing up in Tafileh with physical challenges was not easy. “I used to live a depressing life full of bitterness and hopelessness. I was unemployed and did not have the motivation to pay attention to my talent. I used to sleep all day and stay up all night believing that death is the only way to salvation from this dark reality. I tried to commit suicide many times,” said Yehya.
A glimpse of hope appeared in Yehya’s life when the Training Center for Human Rights in Tafileh approached him to participate in the “My Capabilities Make My Future” leadership training for people with disabilities funded through a USAID Community Engagement Project (USAID CEP) grant. Virtually on the same day, Yehya received a job offer after a four-year job search. He had to make a choice between what he wants and what he needs. In the end, he chose education and training.
The training was not easy and it pushed many of the participants, including Yehya, beyond their comfort zones. On several occasions, he wanted to quit. But a sense of camaraderie that developed between people who understand the challenges he is facing and words of encouragement from trainers kept him going. Most days, his mother waited outside to make sure he was doing ok.
Over the course of the training, Yehya’s confidence grew. Putting his training to the test, Yehya approached his potential employer to reschedule the interview and possibly restructure his working hours to accommodate his training schedule. Yehya’s courage paid off and he was able to start his new job at a garment factory in Tafileh, while he successfully graduating from the training just a few days later.
“I want to get a Training for Trainers degree,” he said. “Nothing puts out the fire of challenge, exhaustion, stress and fear of failure except the taste of success and achievement.” Yehya described his new-found ambition as a ray with no end. His capabilities will make his future.