A Community Approach to Preventing Cholera in Ghana 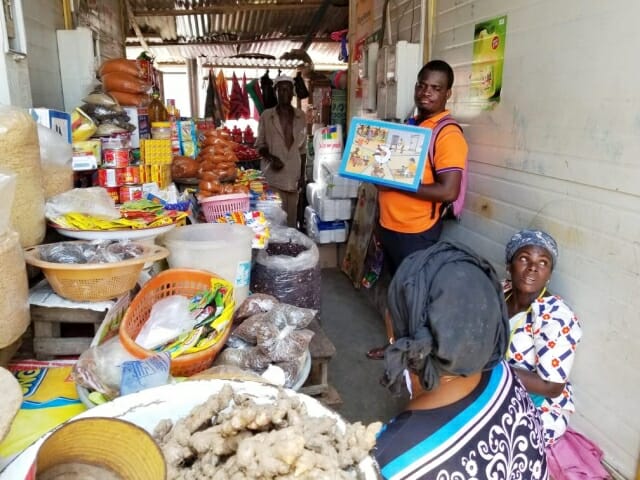 A Community Approach to Preventing Cholera in Ghana

Volunteers comb the marketplaces of Cape Coast, Ghana educating stall owners on how to prevent the spread of cholera. These efforts led to a dramatic drop in cholera incidence from 735 cases in 2016, to just 9 cases since January 2017.

Spread by water or food contaminated with a bacterium called Vibrio cholera, cholera is a highly infectious disease that causes intense diarrhea, dehydration, and even death in very severe cases. When cholera strikes, it can be devastating for a community, but it is preventable with access to clean water, adequate sanitation and the practice of proper hygiene. For nearly a decade with support from the United States Agency for International Development (USAID), Global Communities has worked to prevent cholera in Ghana’s Central Region—first, through the WASH-UP Project which improved drinking water and access to sanitation facilities for urban communities, and currently, through the WASH for Health Project focusing on water and sanitation hygiene (WASH) activities for rural populations. In 2017, Global Communities was at the forefront of the cholera response effort and contributed significantly to the lowest number of cholera cases ever seen in Cape Coast, the most cholera-prone region in Ghana. Only nine cases have been reported in Cape Coast since January 2017 until now, compared to 735 cases in 2016. This represents a record for the region.

The main cholera prevention activities that were carried out involved home inspections, restaurant/food vendor inspections, and market sanitation measures including waste management and proper disposal of liquid waste. Inspection teams also enforced food and meat hygiene and safety, and the seizure of foodstuffs and other materials which could be hazardous. More than 40 volunteers disinfected the entire city including 16 volunteers who disinfected the Cape Coast Township and six volunteers were assigned to disinfect the University of Cape Coast campus and its surrounding communities. The volunteers were grouped into teams of eight, comprising five members and three coordinators per group. Disinfection throughout the city was carried out quarterly, with more than 70 public toilets, 51 container and shipping sites, 41 drains, 35 dump sites, 11 public bath-houses, 16 market places and eight major drains in the markets completely disinfected across the Cape Coast metropolis.

Additionally, wash rooms and toilets in various sites in and around the University campus were all heavily sterilized through the use of chlorine in adherence with bylaws on disinfection. Before Global Communities intervention, “every other month our children used to get diarrhoea and fall sick because they were not washing their hands after they came back from school, and before they had their meals,’’ a beneficiary reported. ‘’But after the behavioural change education received from the volunteers, our children are no longer falling sick because they learned to wash their hands at critical times.’’

The markets and drains around the city were disinfected during the night—when all running businesses, shops and human movement had ceased for the day—in order to avoid harsh chemicals coming in direct contact with the foodstuffs and people. Working at night also allowing volunteers to move freely and effectively disinfect the market spaces without disruption.

In addition to proactively disinfecting the city, intense Behavior Change Communications (BCC) education was incorporated through television and radio broadcasts, public announcements were declared in market information centers, and house-to-house inspections and sensitizations were enforced throughout the quarter. BCC education is critical in curbing the outbreak of future cholera. As part of this process, individuals and households were educated and encouraged to practice basic hygiene behaviors such as proper hand washing and food handling, which can prevent the contraction and spread of  many diseases, not just cholera. Posters and flyers of BCC materials on the health risks of open defecation, handwashing guides noting when and how to wash hands properly, and the proper trash disposal guides were distributed to individuals and posted at various locations in the township. BCC activities successfully targeted 8,462 premises in the city, ultimately reaching 44,732 individuals. The fact that only nine cholera cases were reported in 2017, as compared to 735 cases in 2016, demonstrates the effectiveness of the BCC campaign.

This remarkable achievement is attributed to the community-led approach involving environmental health officers, Ghana Red Cross volunteers, National Service personnel and sanitation guards. One such volunteer proudly voiced that “as a result of the intervention and the distribution of Aquatabs, very few cholera cases were reported in 2017.” The volunteers worked tirelessly over multiple days, despite challenges faced along the way such as food vendors evading education efforts or resisting the seizure of their food items. Additional operational challenges included the logistics of inspecting such a wide area to ensure complete coverage of the city. In order to ensure their measures were enforced, some of the volunteers were included in the Law Enforcement Task team which is backed by the Mayor of Cape Coast to ensure that the sanitation laws are properly observed and that citizens who violate the laws will be prosecuted. The team also had immense support from Cape Coast traditional authorities such as Omanhene and the Queen mother.

With the education and awareness raised through this outreach, the hope is that more people will comply and keep their families and their communities safe from cholera. Though the Cape Coast Metropolis is now considered cholera-free, Global Communities’ will continue to raise awareness throughout communities to prevent future cholera outbreaks in Ghana.