A Youth Facilitator Realizes His Dream 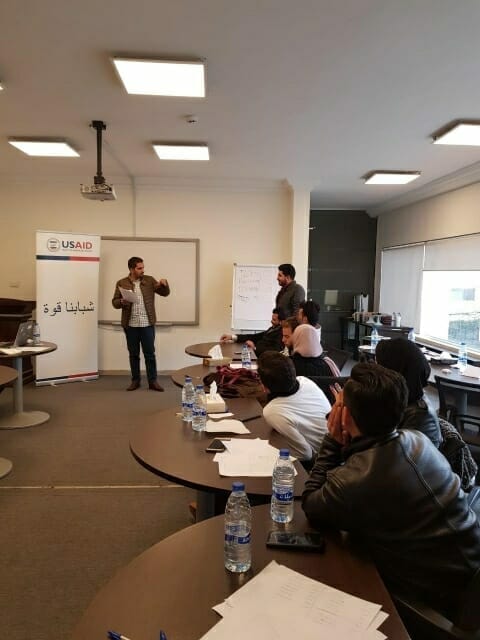 Educating and learning activities empower youth while open new doors and prospects to others
Residing in Rojom Shami Gharbi at the east of the Capital, Mohammad Qoblan is 27, he graduated back in 2014 with a bachelor degree in International Relations. After two years of fruitless job hunting, Mohammad believed that a higher degree would result in better chances of him landing a job, accordingly, he pulled up his sleeves and earned his master’s degree in 2017. Unfortunately, things are not always what they seem, and like the 21% of unemployed youth in Jordan, Mohammad couldn’t find a job. Mohammad says: “I can never explain the amount of psychosocial and moral pressure I was facing, I was on the brink of collapsing, the societal and peer pressure on was enormous, I slowly began to lose confidence in myself”.

Rojom Shami Gharbi is one the 60 communities targeted by USAID YouthPower. Back in September 2019 the activity started rolling out its education and learning programs to the youth of this community, Mohammad’s friends encouraged him to give it a try and participate in the various volunteering and educational activities implemented by the program. He reflects:  “At first I was skeptical and didn’t want to participate, but when I realized that I had nothing much to lose, I followed my friend’s advice and joined the young masses of USAID YouthPower. It was a whole new door opened to me, with horizons and opportunities I never knew of before, my confident started building up as I slowly began to rediscover myself”.

“Apparently it’s not about how many certificates you have mounted on your wall, it’s about giving back and influencing your peers and community, it’s the positive impact you leave that drives your forward”.

“During the previous six years, finding a job was the only concern I’ve ever had, today I look at the future and I feel secured, because I have found a new passion in training youth and positively influence them, I will work harder than ever and realize my dreams of becoming a full pledged trainer, and maybe I will have my own training center one day”.

Mohammad’s dedication, belief and hard work is already feeding off, he is now feeling empowered and has confidently shaken off any shadows of doubt he had on himself before. Mohammad also acknowledges that there are many youth in his community and other communities that face hardships and setbacks; similar to the one he had, he is determined to transfer his knowledge and experience to these youth and help them. USAID YouthPower deploys collaborative youth driven activities to innovatively empower youth such as Mohammad, and enable them to act as engaged citizens and productive members of society with the agency to advocate for themselves, and properly prepare them to enter higher education, vocational training and the workforce.