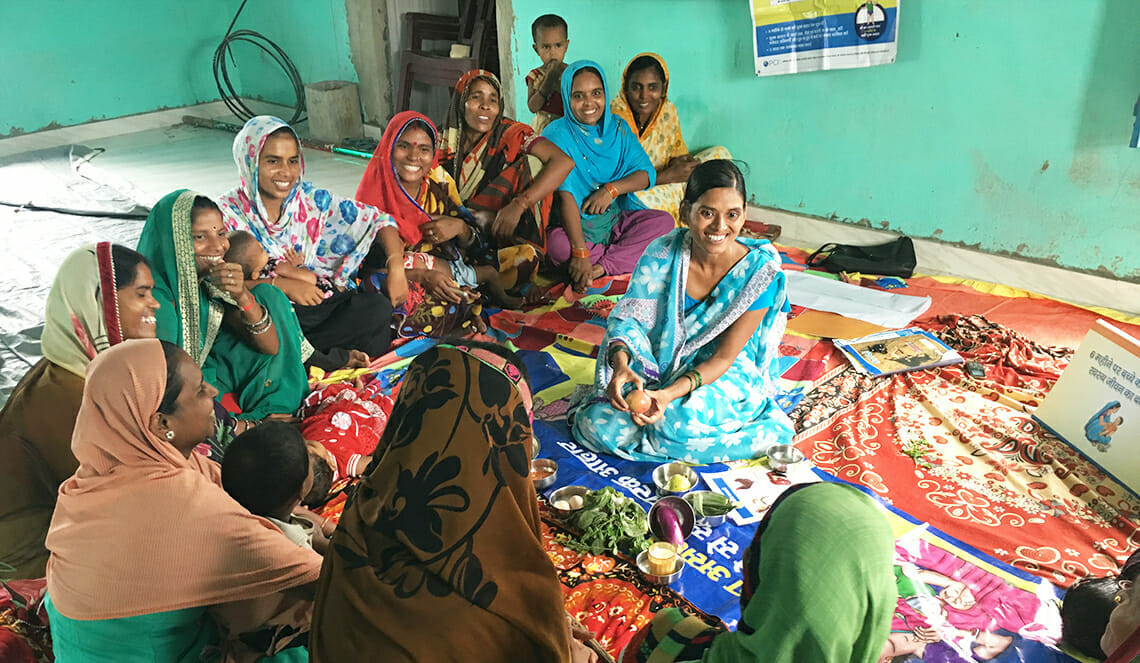 When Babli Devi was 15 years old, she had dreams of becoming a journalist. Instead, she became a bride. Like many adolescent girls and young women in rural India, she was forced to give up her education for an early marriage. Within a few years, Babli had her first child.

For the better part of a decade, she was confined to her home and other people’s decisions about her life. Then, Babli’s husband died of cancer. With no formal education and no job, the mother of four was suddenly left alone to provide for her family’s survival. 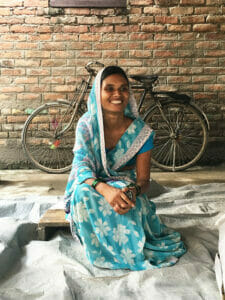 While others might have given up hope in similar circumstances, Babli found a new calling. She wanted to make sure other women had the skills, confidence and network in place to navigate life’s challenges.

“Despite being alone, I raised up my four children. I got courage,” she said. “Even though I had no support, I thought I should support others.”

With training from Project Concern International (PCI) and the Government of Bihar’s Rural Livelihoods Mission known as JEEViKA, Babli became a Community Mobilizer. In this role, she facilitates 15 women’s self-help groups in some of the most vulnerable and marginalized communities in India. The groups meet on a weekly basis to learn about microfinance, savings and livelihood activities. Babli also teaches group members about health, nutrition and sanitation (HNS) issues to help them learn how to better care for themselves and their children.

“Doctors treat once the disease affects [the patient]. Our Community Mobilizers help prevent the diseases,” said Shravan Kumar, a Block HNS Coordinator for PCI and the JEEViKA Technical Support Program. “The money that would be spent on illness is now getting saved.”

In Raipur village where Babli lives, few women complete prenatal check-ups or know how to recognize and address danger signs during pregnancy. The village also has low immunization rates, and many families struggle with malnutrition.

Khushbu Devi, 25, is five months pregnant and a member of one of the self-help groups Babli facilitates.

“When I had two children before this, I had no information about anything. I only knew what elders would tell me,” Khushbu said. “This time, sister Babli told me about health and nutrition and how sanitation keeps diseases away. … And with timely vaccinations, checkups, ultrasounds and iron supplements, both the child and mother stay healthy.”

In addition to education on adopting healthy practices, group members learn how to save money and start businesses that bring in much-needed income for their families. They also discuss social issues like domestic violence and girls’ education and how to advocate for themselves as women. 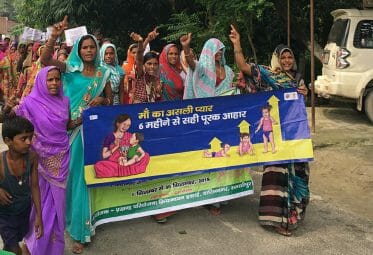 Babli Devi (center) joins women from JEEViKA self-help groups for a campaign rally in the Samastipur district of Bihar, India. While this rally focused on promoting nutrition practices such as complementary feeding, previous rallies have focused on other issues such as girls’ education and the anti-dowry movement. Photo by Maureen Simpson

“When I first started [as a Community Mobilizer], I saw women that did not know how to count money. They did not even know how to talk to people,” Babli said. “Today, they are so confident that they go to the bank themselves. … They borrow money to start work. They have started to believe in themselves. I have seen it.”

Mamta Devi is one such success story. Before joining JEEViKA, the 25-year-old mother of three said she did not know how to write or sign her name and did not socialize with anyone in her village. Now, she understands how to manage her finances, took out a loan to buy livestock and begin animal husbandry, and saved enough money to send her children to school. She also serves as a maternal health liaison for her JEEViKA group, connecting pregnant women to ambulance services and the local health system.

“Before I joined JEEViKA, I did not leave the house. Now I know everyone,” Mamta said. “I got a lot of information which has helped me move ahead. My family is happy.”

As for Babli, who once felt invisible and alone in her struggle as a widowed single mother, the community now looks to her as a valuable leader and women’s advocate.

“[This job] has helped me fulfill my dream of being a journalist in a way. We are sent for surveys and I talk to people,” Babli said. “With the help of JEEViKA and PCI, I want the women of Bihar to be able to take care of their families and create their own identity. … I feel that is my work. I had let go of my dream. JEEViKA fulfilled it for me.”

Through JEEViKA, more than 9.2 million women living in the most vulnerable and marginalized communities of India meet in self-help groups (SHGs) to learn about microfinance, savings and livelihood activities.

With support from the Bill & Melinda Gates Foundation and the World Bank, PCI worked with JEEViKA to integrate health, nutrition and sanitation interventions into the SHGs and related community structures. In 2018, these efforts directly reached more than 2.1 million women in 101 blocks of Bihar.