Breaking the Glass Ceiling in Ghana 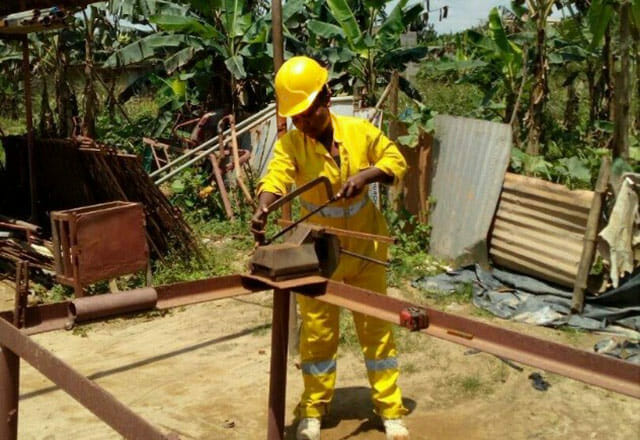 Breaking the Glass Ceiling in Ghana
How one program is changing incentives to help women enter non-traditional occupations
By Karla Yoder, Economic Development and Workforce Technical Specialist for Global Communities  |  This article first appeared in Medium.

Ruth Medufia at her training site.
Ruth Medufia is a trailblazer. The 24-year-old from Sekondi-Takoradi had always hoped to get a steady job and support her family, a dream shared by many other youth in Ghana. What makes her unique though, especially for a young woman, is her interest in welding. Ever since she was a child, Ruth had wanted to learn how to weld, and thanks to the YIEDIE project, she has made that dream a reality. Now, Ruth is working in the construction as a welder, helping break down barriers in an industry traditionally dominated by men.

Ruth’s story is hardly uncommon among graduates of the Youth Inclusive Entrepreneurial Development Initiative for Employment (YIEDIE) project, a Mastercard Foundation initiative implemented by Global Communities. The project aims to help address Ghana’s staggering youth unemployment rate by helping train young people in jobs in the rapidly growing construction sector. From the beginning, YIEDIE has prioritized including women in the programming, understanding that inclusivity is vital to effective development efforts. In Ghana, despite women making up over half the population, just under 3% of the people employed in construction are women.

Still, although it was prioritized, the project struggled at first to generate enough interest from female applicants. A special gender strategy was initiated, providing transportation stipends to help lessen the cost for female participants, and increasing flexibility of working hours to account for many women’s family responsibilities. Community mobilization teams that worked to inform people about the program were given a more equitable gender balance to talk to potential applicants. While these incentives worked well enough at increasing participation from women, we soon ran into another barrier.

For some women like Ruth, the glass ceiling doesn’t represent as formidable a barrier to entering male dominated trades. But for many women, cultural norms dictate which jobs are most appropriate for them. As a result, most women participants selected interior design as their area of training, neglecting the trades that are more commonly associated with men. The idea that women should not be working in these fields is hardly unique to Ghana; similar norms exist throughout the West and help explain gender disparities in many sectors. Whether the Ghanaian women had internalized these ideas and genuinely did not consider it a viable option, or simply feared the blowback that might occur entering a male-dominated trade, many defaulted to a more traditional field of study.

Angelina Forson, another YIEDIE participant who is breaking cultural norms by training to be a heavy machine operator.

Addressing cultural norms around gender is one way to shift attitudes about appropriate work for men and women. Historically, this process helps explain a variety of social changes throughout the world, from women entering the workplace to greater acceptance of LGBTQ rights. This approach is being utilized by Global Communities in the DREAMS program in Kenya, where we work directly with male and female youth to help change norms and behaviors to prevent gender-based violence. The work with boys and men has been especially fruitful, helping them explore attitudes about masculinity and violence toward women, as well as their own ability to prevent and fight it. One limitation of this approach is the amount of time it takes for values to change. YIEDIE could spend the entire project working on these issues and not make a dent in actually increasing the number of women in various industries, so it took a different tack and focused instead on changing incentives.

When applicants enroll in YIEDIE, they select the top three trades they are interested in learning. To help encourage women to enter non-traditional trades, a cap was placed on the number of people who could enter interior design. With the incentive to better themselves still an important factor, the removal of the option for many applicants to enroll in design meant that they would seriously consider another construction trade. No one was forced to enroll in a program they weren’t interested in, there were no quotas to fill in the other trades; simply capping the number of people who could join interior design shifted the numbers. These same women who are trailblazers in their fields are now volunteering to discuss their experiences and help encourage other young women to enter their sectors. Such efforts only increase the number of women who are comfortable with jobs they wouldn’t otherwise consider, and can even begin the long process of changing more deeply ingrained cultural norms. Our experience in Ghana show just how important incentives can be, and how the right ones can help bring change in ways that help individuals, their communities, and those that follow in their footsteps.