Campo Alegre: Towards the Future – The Marching Band 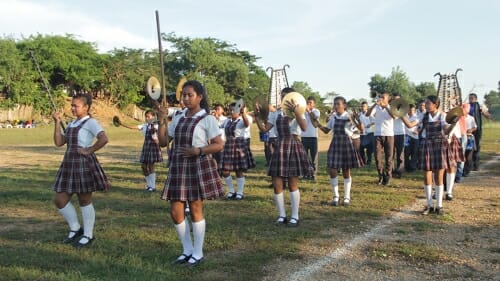 Campo Alegre: Towards the Future
The Marching Band

Campo Alegre is a community in the Municipality of La Apartada in the Department of Cordoba; however, it is closer to Caucasia, a Municipality of the Department of Antioquia. It is a borderland of culture, and the town has seen difficulties in the appropriation of its territory and identity. However, since the BHP Billiton Sustainable Communities ANDA Program began in 2013, the program has created leaders willing to generate sustainable changes.

When Carlos Acosta, Member of the Community Management Committee and Coordinator of the Campo Alegre Educational Institution, was a child, he longed to join the school band and play the trumpet. Unfortunately, his family did not have the money to buy instruments and the uniform. Years later, already in his position as Campo Bello Coordinator, while visiting Caucasia, he came across the presentation of a school band; his memories resurfaced. He decided to turn his unrealized childhood dream into a reality for others. In addition to creating a venue for training, a band would come together as a dynamic element of change for the community.

The first time he brought up the subject to local parents, they did not understand how their children, who spent their free time on the streets, would ever be interested in playing in a band. Carlos did not give up on his idea. He noticed that the kids did take interest in music – for example when they heard a song, they would play the drums with pencils, sticks, or their hands. So, one day, without having consulted their parents, he proposed the idea to the youngsters again.

For the kids, it was a new experience, in part because it motivated them to do something different, but also because it was something that might turn into disappointment if there wasn’t any follow through.

Getting musical instruments became a crusade. One afternoon, they received a call informing that someone who had access to some instruments stashed away in a cellar would be coming to La Apartada, and the professor immediately mobilized. He barged in on the meeting this person was attending and made the request for donation. It was a tense moment, but fortunately he managed to get his way and a few days later got called to pick the instruments up: two trumpets and two clarinets. Unfortunately, the instruments were found to be in poor condition but they took great efforts to restore them.

The truth is that such a situation would not be an obstacle to move on, and the whole thing actually even took on a different tone, since it was no longer simply a venue entertainment for young people, but also an opportunity to rebuild the town’s social fabric.

On the day the instruments were presented to the kids, motivation levels spiked, even if they could not produce a single musical note. So, when instructor Jesus David from La Apartada answered the call to learn about the process, he was surprised to see all the talent and decided to give a helping hand.

The band is comprised of around 60 members including drums, cymbals, horns, lyres and batons. Once rehearsals with the instructor began, three significant community milestones occurred. A higher number of young people, including those who, in the eyes of the town, were the worst troublemakers, were interested in joining, which led to one of the demands being for applicants to have an excellent academic performance. Parents who had initially refused to give their support began to look positively at the option of music working towards reinforcing the community.  On top of that, the ANDA Program with its PACE methodology was introduced, which led them to the formation of a Community Management Committee, and, therefore, to the building of a Community Development Plan which identified that, by supporting the new generations through the prioritization of initiatives, Young People Could Build a Future for Themselves.

Rehearsals with the instructor continued and the work paid off; and it was not long before the band entered their first contest. It was held in San José de Uré, a municipality in the region where the band performed in school uniforms, with the few instruments they had, and those who did not have any instruments improvised with broomsticks. “That time around, it was like reaching for the sky with our own hands, we faced off other veteran, well-trained bands, who enjoyed recognition. In the general round, we came in third and were given the award for best Lyre”, said Andrea Suárez, member of the Community Management Committee with one of her children in the band.

They grew in confidence. While all of this was happening, the implementation of the ANDA Program was underway and about to prioritize the PACE Confianza initiative. One day an invitation came in from a village named Villa Fatima in the Municipality of Buenavista, for a new presentation. The band went there with confidence and gave it their best; however, many of the attendants, and other bands, looked down on the band’s clothes and instruments, and even threw bags of water at them, so they returned to the community as heroes struck by a fate they could not overcome. They questioned whether going ahead was really worth it in those conditions. It was then that the Community Management Committee decided to prioritize the purchase of instruments and uniforms to help the band.

Cariñito, a well-recognized song in Latin America, was the most rehearsed and most requested piece in the band’s presentations. Furthermore, that one song brought them greater recognition, as they got the support of the community, the municipal administration and the ANDA Program, the band continued to be invited to different contests (Planeta Rica – Puerto Valdivia – Caucasia) where they once again put their talent to the test. They were no longer the same raggedy group playing with sticks on their school desks. One of the most significant memories, was when they participated in the National and International Band Competition in La Ceja, Antioquia.

At first, the band had not been invited and, just three days before the contest, one of the guest bands gave up and offered them their spot. It was not an easy decision to make, since there were no preparations nor resources for logistical expenses. However, community families made contributions, led by the Management Committee, raising the money for the rental of a bus. During the tour, they tuned their instruments and managed to make it to the location. The first impression was overwhelming because there were not only bands from all over the country but also from around the world. The first band to perform was from Indianapolis in the U.S. Despite the fact that out of 45 participating groups, the band came in sixth, the band now believed that they had a future, and that with the support of the community, it all was achievable.

Read more about the ANDA program on the website here.

Published 04/17/2017 by Global Communities in Blog, Colombia, The Americas