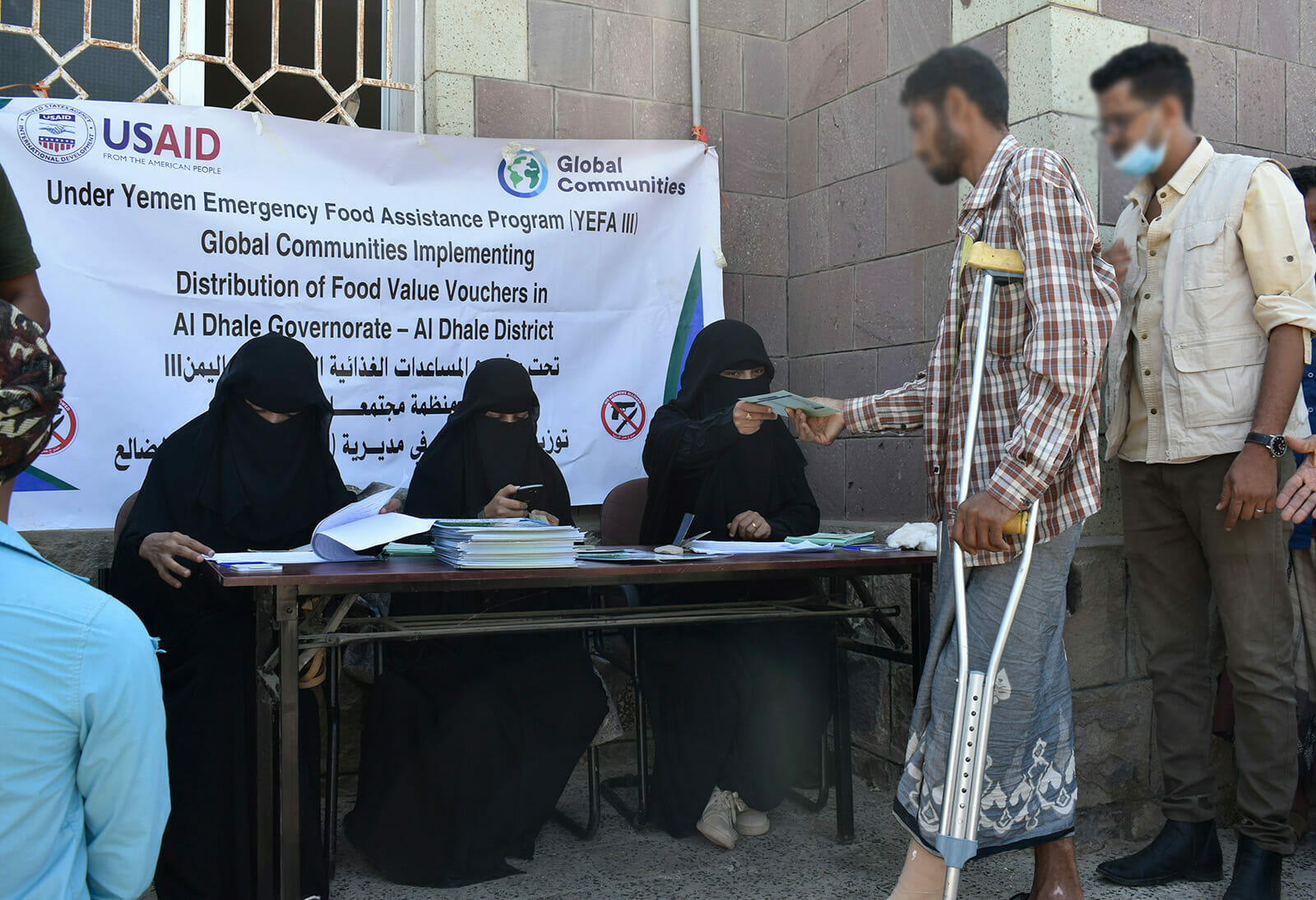 One-year-old Mohammed and his family live in the Qa’atabah district of Yemen, near constant conflict that has killed and injured civilians and impeded access to essential goods and services for the past seven years. When volunteers from the Yemen Emergency Food Assistance (YEFA) III program first met Mohammed, he was 14 months old and suffering from severe acute malnutrition — a life-threatening condition that requires urgent treatment.

With funding from the U.S. Agency for International Development’s Bureau for Humanitarian Assistance, Global Communities designed the YEFA III program to help children like Mohammed and his family receive food and nutrition support as well as hygiene education to reduce hunger and illness.

In line with Global Communities’ approach to emergency response, YEFA programming started with a focus on the distribution of food baskets to vulnerable households through a voucher process. The program then evolved and expanded to integrate nutrition sessions for targeted households to address widespread malnutrition issues. Phase three of YEFA expanded further in scope to provide a referral mechanism for severe acute malnutrition and moderate acute malnutrition cases like Mohammed’s.

Under YEFA III, nearly 40 volunteers trained in community health and nutrition (CHNVs) helped promote wellness and healthy eating in the community while also screening children under five and pregnant and lactating women for malnutrition.

When CHNVs first targeted Mohammed’s family and measured the infant’s mid-upper arm circumference, the result showed that he was suffering from severe acute malnutrition. Furthermore, it was found that Mohammed was not exclusively breastfed for the first six months of his life.

To address Mohammed’s dire health status, the YEFA III program immediately referred him to the Al Salam Hospital Nutrition Department, in Qa’atabah, for therapeutic feeding, routine medications and vaccines doses. Global Communities then followed Mohammed’s case regularly to observe his progress and provide additional support to his family, including nutrition messaging. They were selected for monthly food basket assistance and hygiene promotion, including the distribution of water, sanitation and hygiene (WASH) non-food items (NFI) such as chlorine tablets to reduce waterborne diseases.

Following these activities, Mohammed’s health improved within three months, and he was discharged from the hospital. His case is an example of how, even in an environment of widespread food insecurity and hunger, malnutrition can be treated with appropriate assistance and information.

To follow up with identified MAM and SAM cases, Global Communities coordinated with the nearest health facilities of the targeted villages and facilitated transportation for health staff to provide support services to those households and to pregnant and lactating women. Overall, 3,807 children and 1,242 pregnant and lactating women were screened for MAM and SAM. The YEFA III program also conducted nutrition awareness sessions on topics related to complementary feeding, hygiene practices, and maternal, infant and young child feeding in addition to trainings on the proper use of chlorine tablets.